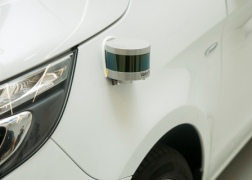 Velodyne LiDAR Inc., the provider in 3D real-time perception systems for autonomous vehicles, announced its selection by Mercedes-Benz Research & Development as a critical sensor supplier for the VLP-32C Ultra Puck™ for further development of fully automated and driverless vehicles.

“We’re pleased to have our LiDAR technology included in Mercedes-Benz’s sensor setup for their fully automated and driverless vehicles. It reinforces Velodyne’s leadership in the space and further ensures that tomorrow’s autonomous vehicles are as safe and efficient as possible,” said David Hall, chief executive officer, Velodyne LiDAR. “Mercedes-Benz is synonymous with outstanding performance as well as engineering quality, and we welcome the opportunity to contribute to such an exciting program.”

In order to bring autonomous driving within reach, Mercedes-Benz has developed an intelligently integrated setup of different sensors that will now include Velodyne LiDAR sensors. The so-called ‘sensor fusion’ enables a continuous situational analysis of the combined data from the various sensors. The goal is to guarantee reliable results to allow a robust planning of safe trajectories for automated vehicles.

“With sensors as the eyes and ears of autonomous vehicles, they are definitely drivers of innovation in that field. Self-driving cars need to understand their surroundings in 3D, including low intensity objects at long range,” explains Axel Gern, vice president of Autonomous Driving at Mercedes-Benz Research & Development North America. “We recognise Velodyne as a market leader for LiDAR sensors, helping us getting fully autonomous vehicles on the road.”

Velodyne invented and patented the world’s first 3D real-time LiDAR sensors in 2005, creating both the core foundational sensor technology enabling the autonomous market, as well as achieving the market share leadership position in truly autonomous vehicle programs. The company’s surround view sensors provide up to 360-degree coverage at long range and have been installed in thousands of vehicles. Sensors today are manufactured at its Megafactory in San Jose, California.