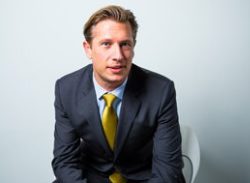 Sprint has named the seasoned Internet of Things (IoT) executive Ivo Rook to the newly created position of senior vice president of IoT. Rook will lead and build Sprint’s IoT business and will be a strategic adviser to Sprint and Softbank. He will join Sprint on January 1, 2018.

Rook has spent his last seven years at Vodafone, most recently chief executive officer for Vodafone’s IoT Business, which has $1 billion (€0.84 billion) in revenue, 50 million connections and 1,400 employees spanning 30 countries. In that role, he led Vodafone’s IoT strategy, driving its growth, products, operations and profit and loss globally.

He also held positions at Vodafone Global Enterprise as director of Northern Europe and director of Germany and Central Europe. As Jeremy Cowan reports, he left unexpectedly earlier this year and did not respond to IoT Now‘s questions about his next steps. (Also see: Ivo Rook quits Vodafone’s IoT business and Erik Brenneis returns as temporary cover.)

“We’re very excited to have someone of Ivo’s calibre and expertise lead our IoT organisation,” said Jan Geldmacher, president of Sprint Business. “He brings a wealth of experience to Sprint including organisational leadership, sales success and the ability to develop end-to-end product and marketing strategy that leads to sustained growth for companies.”

Rook will lead a group of product specialists to develop and “operationalise” IoT solutions, says Sprint, in a category that continues to grow exponentially. He will be responsible for driving business-to-business (B2B) and B2B2C (to consumer) growth strategies, including funding, alliances and development of operationalised solutions.

Also in his role, Rook will act as the liaison officer to the Softbank Group of companies involved in the IoT space.

“Sprint is a global leader in the development of IoT solutions,” Rook said. “I’m thrilled to join a company that is incredibly focused on this space, which will provide outstanding growth in the future. My focus will be on developing secure IoT solutions for our business customers and all people who want to make the best of the digital revolution.”

Rook earned a Masters in Information Management from Erasmus University in Rotterdam, The Netherlands and has leveraged his scientific background into a career in strategy and deal making as a corporate entrepreneur. He is a pragmatic executer and truly global player, having worked many years abroad and speaks four languages.