TM Forum, the industry association driving digital business transformation of the communications industry, unveiled its City as a Platform Manifesto to accelerate the development of smart cities globally. Launched at this year’s Smart City InFocus event in Yinchuan, China, all Manifesto signatories share a common desire to develop a new city-scale data economy that drives sustainability and inclusivity, by using digital platforms.

“The cities that use modern digital technology to create a better experience for each and every citizen, are the true smart cities. TM Forum’s city platform principles offer great guidelines to achieve this goal,” said Suvi Linden, Member of the United Nations Broadband Commission and former Minister of Communications in Finland.

All signatories to TM Forum’s City as a Platform Manifesto have agreed to follow ten common principles when deploying city platforms to serve residents, local businesses and other stakeholders. These principles act as guide to those setting public policy and a design philosophy to unite the many organisations involved in each smart city programme, including large and small technology companies.

“As the world’s population expands and cities become denser, smart city programmes are contributing to a better quality of life. However, technology by itself will not solve the challenges facing urban centres around the world. Instead a shared, collaborative approach between the public and private sectors is needed in the development of local data economies to create services that will improve lives,” said Carl Piva, VP and managing director of TM Forum’s smart city initiative.

The European Commission’s Connecting Europe Facility is a key EU funding instrument to promote growth, jobs and competitiveness through targeted infrastructure investment at European level. To grow data economies in cities the Commission recognises the value of interoperability and common building blocks which is a key reason for its support of the manifesto.

“In addition to a relentless focus on citizens, there is a huge untapped economic agenda to consider for city governments. According to a recent study by Frost & Sullivan, the smart city market alone is estimated to be worth 1.5 trillion USD by 2020. Cities are, and always have been, the largest marketplaces on earth, and the time is right for cities to also develop digital marketplaces that benefit people living in cities. Cities are where digital ecosystems collide,” Piva continued.

While monetisation will become a focus, the fundamental goal of a city platform is to improve life in the city. Jamie Cudden, head of Smart Dublin, commented, “The manifesto’s focus on collaboration and openness will help cities to realise this ambition. In Dublin, we see the City as a Platform as a key enabler to develop evidence based solutions that will enhance city living”.

Martin Brynskov, chair of Open & Agile Smart Cities (OASC) said, “At OASC, we know that a thriving global market, that really caters for local needs, is only wishful thinking without a strong common ground: open standards, open APIs, open architectures. We support TM Forum’s focus on the City as a Platform because of their deep commitment to these principles.” 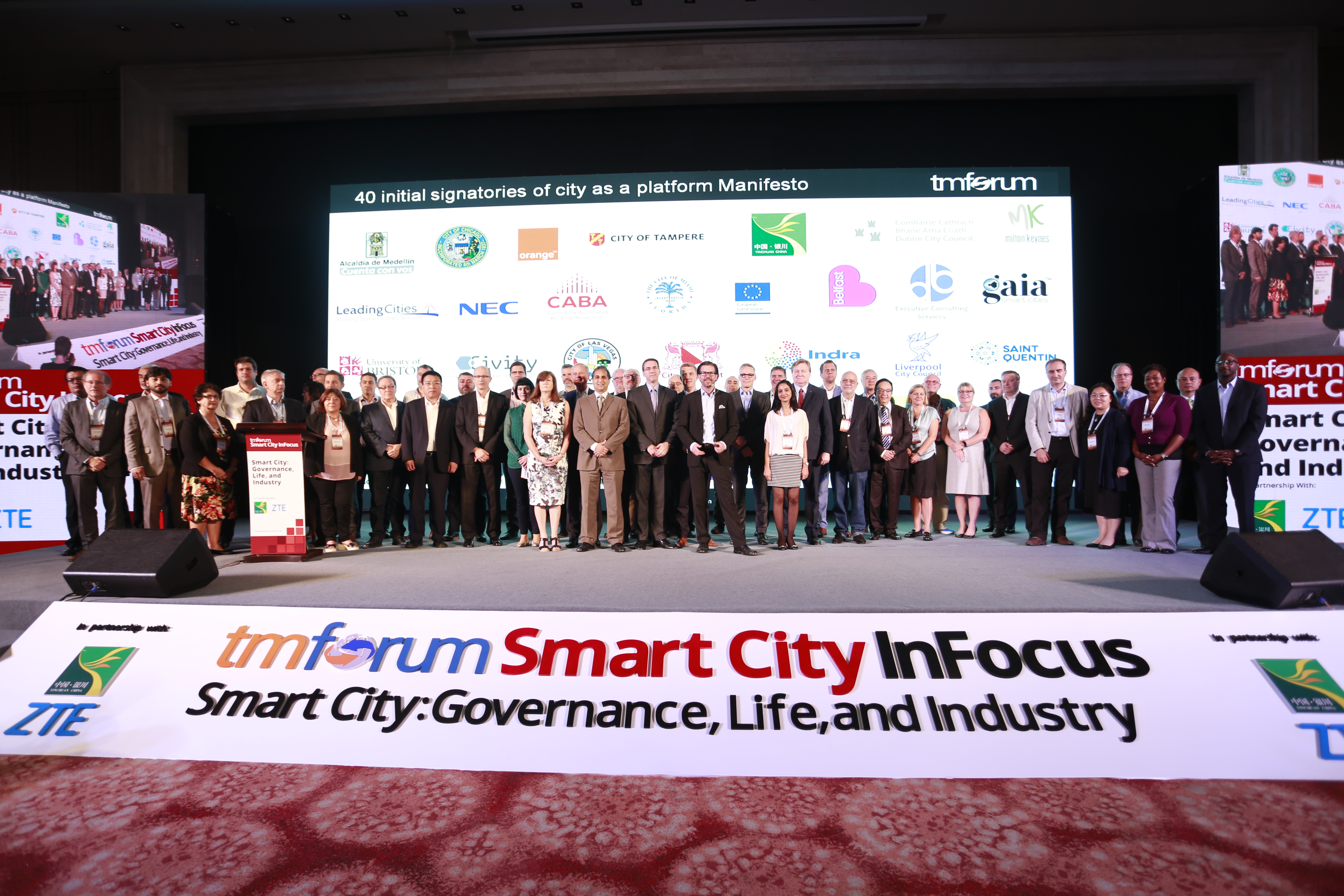 Interoperability is also key to the FIWARE Foundation, its CEO, Ulrich Ahle, said, “Open Standard APIs are crucial to foster a sustainable investment by solution providers, particularly SMEs and start-ups, who can target a digital market where their solutions can be interoperable with others’ and portable across cities.

We are proud that FIWARE NGSI has been recommended by TM Forum as the API unleashing the potential of right-time access to information describing what is going on in cities. We are also collaborating with TM Forum in delivering the components that support the transition from traditional Open Data approaches to advanced Data Economy concepts, transforming cities into engines of growth.”

The notion of open architecture is further echoed by Antonio Ceño, global head of Public Administration Solutions, Indra, who commented, “The success of our approach to the Smart City model resides in the idea of fostering collaboration instead of competition. Having created an open ecosystem […] cities and universities have generated a constantly-growing community where the combined value generated is immensely greater than the sum of the values each one could separately provide.”

More information about the Smart City InFocus event, attended by 1,000 people from 70 countries, which runs from 19-21 September in Yinchuan, China is available here.

CoComment on this article below or via Twitter: @IoTNow_OR @jcIoTnow