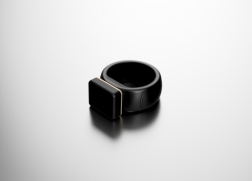 Titanium Falcon, a Silicon Valley start-up founded in 2014, has begun shipment of their developer kits. The device, which is the first motion-control, open application smart ring, allows users to control a wide array of devices and interfaces using natural hand movements.

This gesture control allows for seamless interactions with technology, utilising sensitive motion sensors to enable use with an endless amount of applications like never before, for gameplay, VR, AI, home tech, social, cameras, fitness, and more. The Bluetooth connection syncs with different devices and applications with ease, while the wearable is small, sleek, and unobtrusive.

The easy integration makes this ring both functional and extremely accessible to all ages. Select companies and developers, such as Ubisoft, Ericsson, Spatialand, and VRotein, will be receiving development kits to further integrate the wearable for multiple formats.

While the company will be initially focused on integration with VR and gaming consoles with the release of the device, they do have plans to expand into more applications very soon. Titanium Falcon looks forward to working closely with developers and brands to create great partnerships.