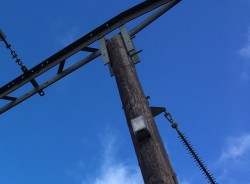 Remote sensor monitoring provider EkkoSense has successfully rolled out stage 3 of a proactive powerlines maintenance / fault early warning system for electricity network provider Scottish and Southern Electricity Networks (SSEN). By the end of 2017, EkkoSense will have installed a Long Range IoT network covering 1,000 km on the Isle of Skye Trident Line – one of the country’s most remote electricity networks.

The EkkoIoT early warning solution uses sensors installed on utility poles to monitor each asset’s precise position. Any movement data is transmitted to a LoRaWAN base station, which connects to the EkkoSense software and is analysed – categorising the assets (wooden poles) as Critical, In Danger, Warning or OK. Status is displayed within the EkkoSense dashboard, along with a map view that shows its exact position along the power line.

Stewart Reid, head of DSO and Innovation at SSEN commented “Working with EkkoSense we now have 120 sensors installed with 400 more planned.  They are providing us with visibility of the mechanical status of our poles on a 132kv line across the Isle of Skye. Movement of our poles beyond defined limits is an indication of mechanical failure, this is usually a precursor to electrical failure so by having a new “sense” we are able to respond to faults before they develop into interruptions in some cases and in all cases we are able to respond in a more informed manner. Data is already coming into the EkkoSense software which will alert us to when poles move beyond their design margins.

“The EkkoIoT sensor and software solution has the ability to prevent downtime, and also save a lot of time and money though scheduling engineers more efficiently both through a reduction in power interruptions but also by a reduction in the need to undertake post-storm patrols. This is an exciting pilot project that we hope will allow us to demonstrate an impressive ROI before rolling out further.” continued Stewart Reid for SSEN.

Stu Redshaw, CTO of EkkoSense, added: “This has been an exciting project. The initial feasibility study in late 2016 was a tremendous success with the EkkoIoT sensor and software successfully passing testing by SSEN. The exciting bit now is to get the meaningful data from the poles and see how quickly we can get a full ROI for the project. And then, apply the technology to other networks or applications. At EkkoSense we believe it is just the start!