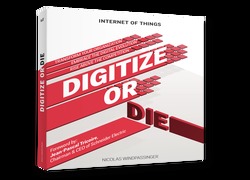 This is a very big book. The review copy was a PDF file that ran to 251 pages. The title is somewhat dramatic but the author does make a convincing case for that statement, citing companies such as Kodak and Nokia. However that is a relatively easy task.

The main thrust of the book is to expand “on the IoT, beyond the pure technology element, in a way that would help companies understand how to transform, leverage themselves and supersede their competition.”

That is a commendable objective, but the book includes a lot of background information before we get to Chapter 3 on “Digitisation Strategy: The IoT Methodology” on page 37. For example, it covers the mainframe computer period from 1950 to 1980; building the backbone of the Internet from 1980 to 2000; and Internet services such as Google from 2000 to 2017, says Bob Emmerson.

The methodology starts with the customers: their needs and pain points, and then it indicates how to digitise the current portfolio while embracing technology, differentiation strategies, business models and a transition process. However, in Chapter 3 the book seems to contradict itself when covering the first step.

The stated starting point is four customer–centric bullet points, but this is followed by a statement that the first step begins by addressing IoT technology, which that has six different layers. If it’s not a contradiction then it is confusing.

The remaining three elements are summarised in Chapter 4, which devotes a mere eight pages to the customer’s needs. However, Chapter 5 employs 60 pages on IoT technology and the reader is told that “to understand the IoT you must understand what hides behind IoT acronyms such as CoAP, AEP, Thread and so forth.” It would have been better to cover technology after the chapters on differentiation strategies and business models and to do so in less detail.

The main thrust of the book, outlined earlier, is somewhat ambitious and it is easy to criticise the result. That said, Digitise or Die covers a lot of IoT ground, too much at times, but that can be seen as a positive problem. It works well for business professionals who know that they need to understand the emerging environment but don’t know where to start. It’s also a book that can serve as a reference work.

The author is Nicolas Windpassinger, global vice president Partner Program, Schneider Electric. Sales revenue will be donated to Alzheimer’s Association and Fondation de France. It’s available for pre-order on Amazon and will be launched mid November.

The book has been reviewed by Bob Emmerson, freelance writer and telecoms industry observer