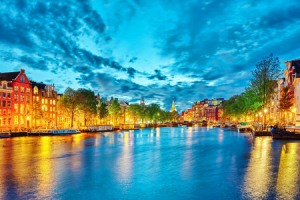 The justice system is known for many things, but efficiency is not one of them. Neither is being up-to-speed with technology. One joke goes that the unofficial IT slogan of the courts is, “Yesterday’s technology, tomorrow!”

Into this space comes LegalThings, an Amsterdam-based digital contracts company that’s aiming to update how those accused of a crime move through the justice system by making the law accessible while making judicial record-keeping more open and secure.

After winning a “blockathon” competition in September hosted by the Dutch Ministry of Justice and Security, LegalThings began a pilot project with the Public Prosecution Service of the Netherlands, known as the “Openbaar Ministerie,” or OM, in Dutch. The project aims to build a system to process low-level criminal offenders quickly and with more transparency. If successful, it could be a huge time- and money-saving enterprise for the government.

“What you see now [in the justice system] is there is a lot of procedures, and those procedures are important to create a fair legal system, but they’re also really labor-intensive,” said Arnold Daniels, a co-founder of LegalThings and its chief software engineer. “What we’re trying to do is create an alternative to that.”

How might that work in practice? Imagine someone nabbed for possession of a small amount of illicit drugs, a crime that, in the Netherlands, can carry a fine of a few hundred euros. There are a number of parties involved in processing such a law enforcement action: the police who catch the alleged offender, the forensics expert that examines the drugs, and the OM.

Depending on whether the forensic expert is on-site to test the drugs, processing such an enforcement action can take anywhere from several hours to a couple days, said Sanne Giphart, innovation manager at OM. While some record-keeping systems have been made digital, that’s an ongoing process, Giphart explained. Things can move slowly.

By contrast, with the LegalThings application, the accused can get an explanation of the relevant law, choose whether to be represented by counsel, and agree to pay the relevant fine—all on their smartphone. All told, the actual processing of the offender takes about 30 minutes, and every step of the exchange is recorded, time-stamped, and made unchangeable using cryptography to ensure records can’t be fudged.

So far, OM, which is comparable to a mashup of the Department of Justice and local district attorneys in the U.S., has only experimented with the technology on “dummy data” involving a drug offense and a domestic violence offense, Giphart said. “The next step is to let people get familiar with this type of technology within the [OM] and then hopefully we can implement on one stream of cases.”

The challenges to implementing such a system are not purely technological. It also will likely require some changes in both public and institutional attitudes toward judicial record-keeping, said Daniels. “With this system, there’s really no backsies,” he explained. “You can correct it, but you can always see your initial action.”

Unlike other blockchain systems that use a publicly distributed ledger, the LegalThings project with OM allows the relevant data to be stored in a single, shareable file, something Daniels said is important in order to respect the privacy interests of the accused. He said the company is working on a way to make storage of the file more secure, by shredding it into pieces stored in different places around a network, making unauthorised access harder.

The technology underpinning the pilot project is the core of LegalThings’ main business: an ecosystem for automated digital agreements. In contrast to coded “smart contracts,” LegalThings One is marketed as offering “Live Contracts”: documents that are digital and automated but still readable to humans. The company on Dec. 7 launched a presale of digital tokens to use these live contracts, and is hoping for broad adoption by the global legal market.

With strained budgets, public courts and criminal justice agencies will likely continue to struggle to keep pace with technology while confronting new challenges, such as handling increasing amounts of data.

Is the blockchain one solution that could move the needle? It’s not clear yet, said Giphart. “That’s why we need to experiment, because no one knows the one way to go,” she said.