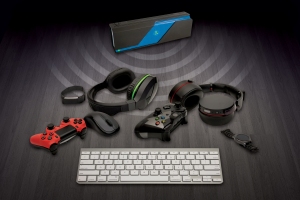 Powercast Corporation, the provider of radio-frequency (RF)-based long-range power-over-distance wireless charging technology, announced that it will unveil at CES its FCC-approved (Part 15, FCC ID: YESTX91503) and ISED-approved (Canada IC: 8985A-TX91503) three-watt PowerSpot transmitter which works in the far field(up to 80 feet) for over-the-air charging of multiple devices – no charging mats or direct line of sight needed.

Powercast used the experience it gained powering industrial and commercial devices with its initial Powercaster® transmitter (FCC and ISED approved in 2010) to develop the new smaller, smarter and less expensive PowerSpot transmitter specifically for the consumer market. The PowerSpot is the industry’s first long-range, far-field, power-over-distance wireless recharging transmitter for consumer devices to gain FCC and ISED approval.

Creating a coverage area like Wi-Fi, a Powercast transmitter automatically charges enabled devices when within range. The transmitter uses the 915-MHz ISM band to send RF energy to a tiny Powercast receiver chip embedded in a device, which converts it to direct current (DC) to directly power or recharge that device’s batteries. 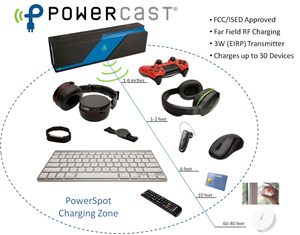 Powercast will begin production of its standalone PowerSpot charger now that it is FCC approved and is also offering a PowerSpot subassembly that consumer goods manufacturers can integrate into their own products.

Powercast is in discussions with several manufacturers, and has inked deals with two household names, since releasing a wireless power development kit in early 2017 containing the PowerSpot subassembly.

The company’s vision is to enable long-range, true wireless charging where consumers simply place all Powercast-enabled devices for charging within range of a PowerSpot in their home or a public place.

“Others might be talking RF power possibilities, but we have consistently delivered far-field wireless power solutions that work, safely and responsibly, under FCC and other global standards providing power up to 80 feet,” said Greene. “Our robust technology has capabilities beyond today’s permitted standards, so our product releases will evolve as regulations do.”

Enabled devices charge when in range, but don’t need direct line of sight to the PowerSpot. Powercast expects up to 30 devices left in the zone on a countertop or desktop overnight can charge by morning, sharing the transmitter’s three-watt (EIRP) power output. Charging rates will vary with distance, type and power consumption of a device.

Power-hungry, heavily used devices like game controllers, smart watches, fitness bands, hearing aids, ear buds, or headphones charge best up to two feet away; keyboards and mice up to six feet away; TV remotes and smart cards up to 10 feet away; and low-power devices like home automation sensors (window breakage, temperature) up to 80 feet away. An illuminated LED indicates devices are charging and it turns off when they’re done. Audible alerts indicate when devices move in and out of the charge zone.

“We know consumers also want to charge mobile phones, so at CES, we will showcase a technology demonstration, developed with a partner, of a PowerSpot transmitter that adds the Qi inductive wireless charging standard adopted by many mobile phones,” said Greene.

“This combination would provide a best-of-both-worlds solution, operating within the FCC regulations that exist today, including RF over-the-air charging for multiple PowerSpot-enabled devices placed near the transmitter, and Qi proximity charging for power-hungry Qi-enabled mobile phones placed directly on the Qi charger on top of the PowerSpot transmitter.”