Home › IoT News › Bosch, Vodafone, and Huawei enable smart cars to communicate with each other 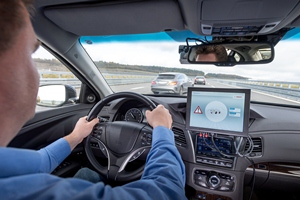 It is Friday afternoon, and the traffic on the A9 freeway near Munich is congested. Navigation requires complete concentration. Other vehicles are constantly cutting in front of the car, forcing the driver to brake abruptly − which is the cause of many accidents, slow-moving traffic, and stress.

Intelligent mobile telephony can alleviate some of these problems and help prevent potentially dangerous driving situations from becoming even more critical. Known as Cellular-V2X (vehicle to everything), the technology makes it possible for a car to communicate with other vehicles and its surroundings through mobile telephony.

Since February 2017, Bosch, Vodafone, and Huawei have been performing trials of the new, high-performance technology − the first companies in Europe to do so. The A9 freeway in Bavaria is the location for the field tests with the first 5G test modules. For the first time, the companies are demonstrating that driver assistance systems such as ACC adaptive cruise control also benefit from the direct, instantaneous exchange of information between vehicles. 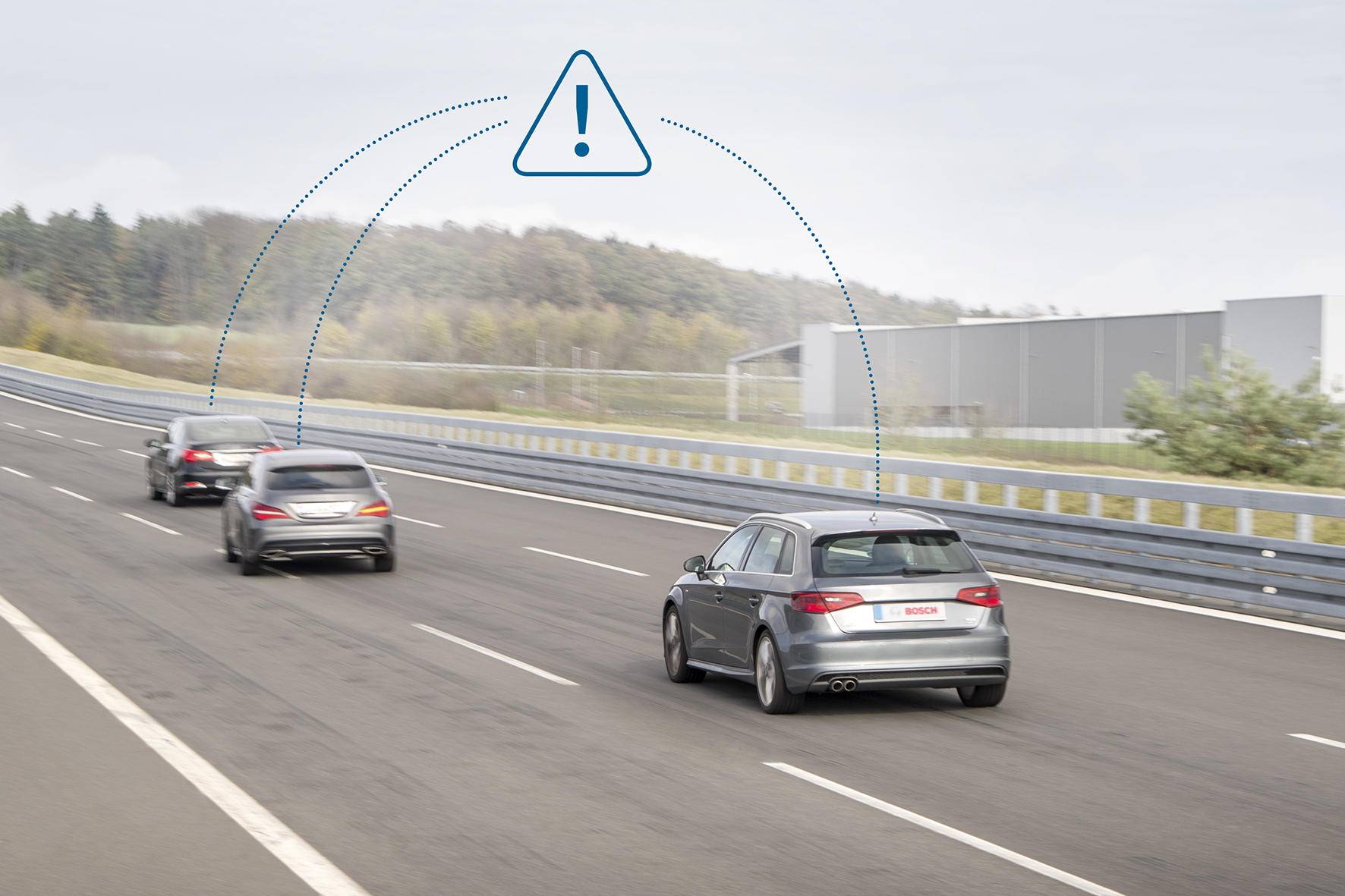 Until now, Cellular-V2X has been used as a real-time alert system when changing lanes on the freeway or when the car ahead suddenly brakes. ACC not only warns the driver, but also automatically accelerates and brakes. The new mobile telephony system thus paves the way for automated driving. Achieving the goal of fully connected traffic will involve teaching vehicles to communicate with each other and exchange data directly.

Direct communication between vehicles provides information about what is happening in parts of an intersection not visible to the driver, over the crest of a hill, or on the freeway beside or behind the driver’s own car.

Seeing beyond the sensors’ reach

ACC adaptive cruise control maintains the speed specified by the driver and − thanks to a radar sensor − the preset distance to the vehicle in front as well. ACC detects a vehicle that suddenly cuts in front as soon as it enters the radar sensor’s detection range. 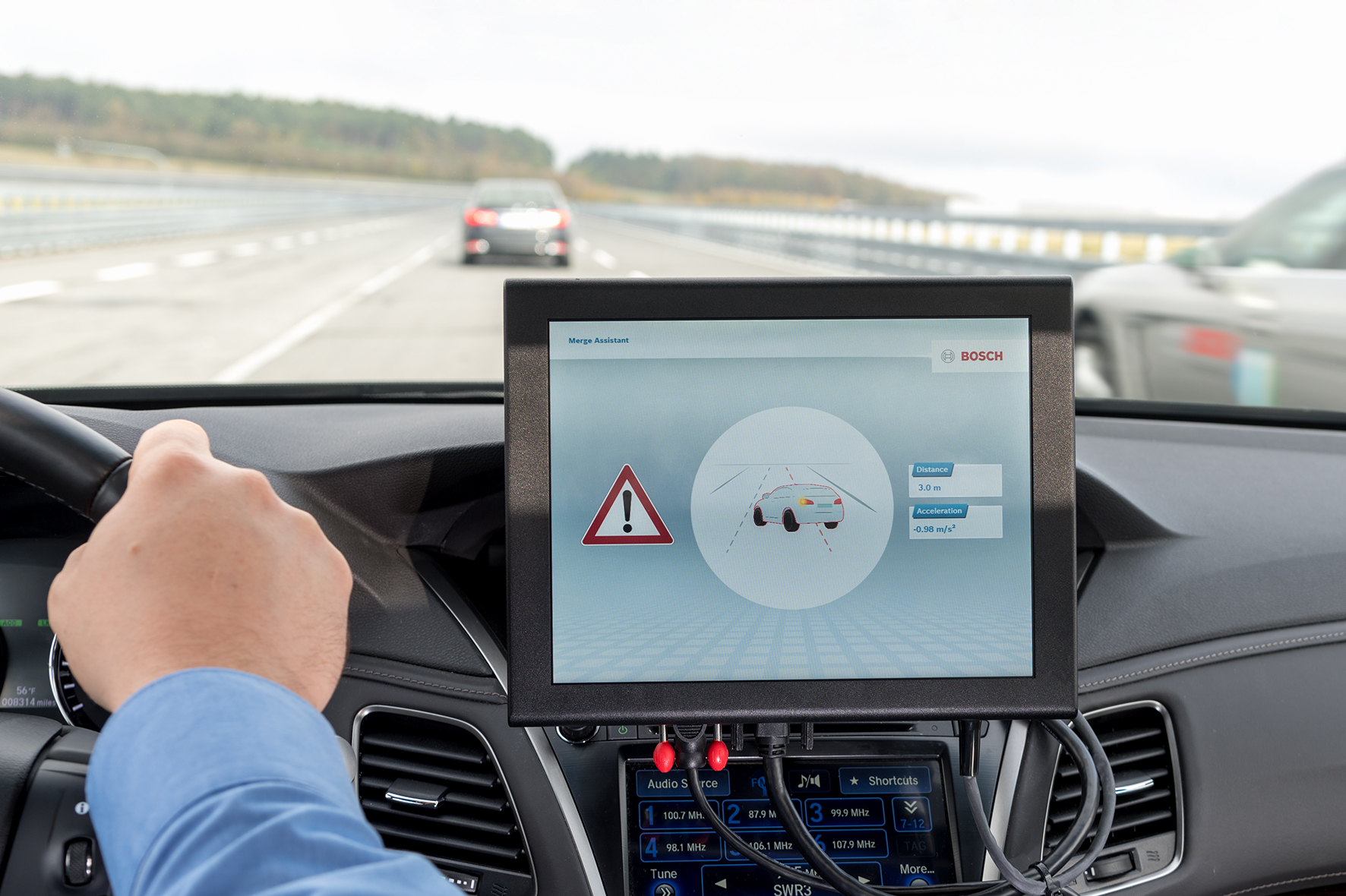 When cars communicate directly and in real time using Cellular-V2X, it is possible to detect such events sooner. Through mobile telephony, connected cars can directly transmit information, such as their position and speed, to all vehicles within a radius of more than 300 metres. Moreover, they can do so without going through any intermediate channels via the base stations and with virtually no delay.

As a result, a vehicle knows the driving behavior of others around it. If, for example, a car suddenly cuts in front of another vehicle, ACC knows what is about to happen − even before it registers with the driver or the radar sensor. The car then automatically adjusts its speed earlier than it would have before, so that the vehicle cutting in can do so smoothly.

Once enough distance to the car in front has been re-established, ACC automatically accelerates to the preset speed. Even in congested traffic, this function makes driving even more relaxed and stress-free for drivers, while also preventing abrupt braking and acceleration on the freeway. Overall, traffic becomes smoother and more efficient. Thanks to the foresight provided by the technology, vehicles can go with the flow.