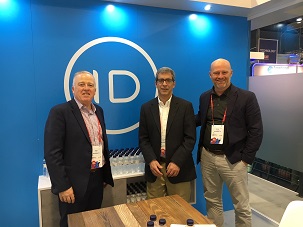 For about two years the Internet of Things (IoT) has been in what Gartner’s Hypecycle refers to as the ‘Trough of Disillusionment’. So say three InterDigital executives talking to Jeremy Cowan of IoT Now at Mobile World Congress (#MWC18) in Barcelona.

Jim Nolan, EVP of IoT Solutions at InterDigital says, “But it now feels that operators have figured they can build out a network and build a business.”

Narrowband-IoT standards have played a part in that sea change. “NB-IoT will take a bit longer – there’ll be lab trials then limited scale deployments.” The industry is moving towards standards-based low power roll outs. “Operators are no longer happy with proprietary solutions and are now building out their own services platforms. They’re moving away from outsourcing.”

“Initially,” says Nolan, “operators thought that IoT business was just connectivity. But that’s not the case now, and MVNO (mobile virtual network operator) plays have run their course. Modules are now in a realistic price range and connectivity alone wouldn’t run a business.” Telcos need to offer an end-to-end service.

How do operators identify their target markets? IoT Now asks. “They can be all things to all men and women.”

“That’s right,” Nolan adds. “In Asia there’s a drive by operators to get into the home. In Europe and North America they’re more often targeting the enterprise. I don’t think most (network operators) have nailed down yet which verticals to go for. Most don’t yet know whch use cases to support. In Asia it’s more firm, with operators offering Home Security packages with 5-7 sensors.”

With a potentially low ARPU (average revenue per user) Asian IoT service providers will clearly have to look for high volumes. That may mean relying on scale being delivered by system integrators.

Who will be Masters of the Universe?

IoT Now wants to know if operators are therefore building IoT networks for the integrators. “So network operators won’t be Master of the IoT Universe then?”

“No, it will be integrators. This is like the build-out of App Stores in 3G fifteen years ago. ”

“But operators like Vodafone, Verizon and Deutsche Telekom all believe that they can do it all,” says IoT Now.

“You remember the app stores at HP and Nokia?” Nolan asks rhetorically.

“Operators have waited for the connectivity battle to shake out,” says Patrick Van de Wille, InterDigital’s chief communications officer. He concedes that low power IoT technologies like Sigfox and LoRa will have a place in the market. “It’s like WiMAX versus LTE, there’ll be a strong niche.” He believes that Sigfox is in a race to the bottom on price.

Bob DiFazio, VP of InterDigital Laboratories – Future Wireless, comments that, from a research & development point of view, “We’ve been watching the proprietary versus standardised systems debate in IoT, but people are now very comfortable with 3GPP standards-based NB-IoT. NB-IoT’s integration by 3GPP with LTE has been a beautiful thing, to give longer battery life, better range, and all integrated with the overall cellular system.”

Van de Wille adds, “When proprietary solutions got a lot of buzz two years ago, I used to say, ‘Look at what the world of business is made of, it’s standards. Proprietary solutions may work in a company, but they don’t scale or integrate when there are mergers and acquisitions.”

“What are we working on now?” Bob DiFazio echoes IoT Now’s question. “In 5G standardisation we were active in 3GPP. THis is the first half of Release 15, and the second half in June. Then we’ll look at R16 items like millimetre wave. We’re already working on video compression and mobile edge computing to minimise latency.”

Says Jim: “We have a powerful Qualcomm platform running as a gateway, but it’s also a mobile edge device. We’re using the platform to do video analytics at the edge. That’s not 5G mobile edge compute but it’s doing a major compute close to the edge. In airports it could be used for facial recognition and baggage monitoring. Traffic, accidents, weather; they all need relatively local and real-time compute.”