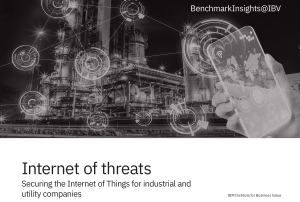 This World IoT Day (celebrated around the globe on Monday 9th April), I am particularly excited to see quite how far we have come with the Internet of Things. The IoT market is projected to grow from an installed base of 15 billion devices in 2015 to 30 billion devices in 2020 and 75 billion in 2025.

And so, IoT has become ubiquitous. Insights derived from data collected from connected devices are being used across industries to enhance productivity, solve problems and create new business opportunities and operational efficiencies. But there are also risks – and that is where security comes in, says James Murphy.

We can ill afford security to be an afterthought, as it perhaps once was for the earliest IoT applications, when ‘things’ were first coming online. We cannot allow the Internet of Things to become the Internet of Threats and must develop new strategies to mitigate against vulnerabilities in the network or cyber-security risks. Easier said than done. According to the 19th edition of the IBM Global C-suite Study conducted by the IBM Institute for Business Value (IBV), respondents showed:

The same report highlighted that 36% of executives surveyed say securing an IoT platform and its devices is a top challenge for their organisations. One of the biggest challenges is deploying IoT technologies at a faster pace than they are secured.

Only a small percentage of industrial and utilities organisations have fully implemented IoT-specific security technologies. Most are in the early stages.

So what can be done?

So, this World IoT Day I encourage you to put plans into action to catch up on the threat and become unassailable.

For more information and to download a copy of IBM’s 19th edition of the IBM Global C-suite Study conducted by the IBM Institute for Business Value (IBV), please click here.

The author of this blog is James Murphy, global leader IoT, Security and Blockchain, IBM Watson and Cloud Platform