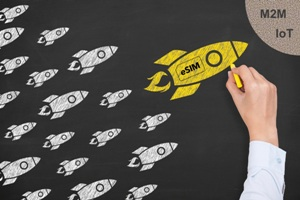 One thing became clear from these events – eSIM is ready to make an impact in consumer IoT and M2M markets. And there are three reasons for this surge in optimism, says Sebastien Violette, manager for Mobile & IoT at Gemalto.

More mature understanding of what an eSIM is

Even though they come from different backgrounds, stakeholders like mobile operators, MVNOs, MVNEs, OEMs, eSIM providers and service providers are now very knowledgeable about what an eSIM is. Basically, multiple mobile operators’ profiles can be generated and securely downloaded and provisioned over the air onto a soldered secure element set into the device, based upon GSMA’s Remote SIM Provisioning specifications.

The industry generally now grasps the main benefits of eSIMs, such as:

eSIM is a reality endorsed by stakeholders

As far as the consumer IoT market is concerned, demand is growing. According to Arthur D Little’s survey, 80% of consumers are interested in a mobile eSIM-enabled device. In addition, eSIM technology is increasingly and successfully being tested in secondary devices. With more eSIM-capable smartwatches and connected PCs available, such as the Apple Watch, Microsoft’s new Surface Pro tablet and the Google Pixel 2 phone, opportunities have risen in the consumer IoT sphere.

Consequently, more and more operators, including Telefonica, have deployed eSIM remote subscription management platforms for consumer devices. The adoption of this technology from top consumer brands wasa major breakthroughin 2017 for eSIM’s mass market potential, along with the successful hard work around eSIM interoperability.

Jean-Christophe Tisseuil from the GSMA recently stressed that although the two eSIM provisioning and activation architectures have a lot in common, M2M and consumer eSIM dynamics are different. However, they do share the following four features:

The difference in the M2M market lies within the Subscription Manager Secure Routing (SM-SR). For example, in the automotive industry, a connected car can initiate a remote subscription update over the lifetime of the vehicle, even when the car changes ownership. A good example is the recent announcement from Brazil’s Embratel to transform the connected car experience in Latin America by enabling remote updates.

On the consumer IoT side, based upon GSMA’s SM-DS Root Service initiative, the Subscription Management Discovery Service aims to enhance eSIM connectivity activation for consumer devices. It achieves this by simplifying the customer experience of connecting an open market consumer device to the mobile network with the offer of their choice.

These two markets will now continue to evolve separately, with different technical roadmaps and deployment schemes. In the short term, the priority will be given to key topics such as eSIM use cases in IoT, user registration, user on-boarding experience, customer ‘lock-in’ and the introduction of new sales channels with OEMs.

The transition towards eSIM is inescapable

With a high number of consumers showing interest in eSIM-enabled devices and the technology being successfully tested in devices like smartwatches and PCs, the future certainly looks bright for eSIM in the IoT market. And as a result, we’ll be seeing ever more stakeholders taking advantage of the benefits of eSIM in the M2M market.

The author of this blog is Sebastien Violette, manager for Mobile & IoT at Gemalto