Over the last few months Berg Insight has been looking closely at the IoT platforms market.

The CMP market is characterised by a limited number of providers, although several new players have emerged in recent time following developments in the domains of LPWA and software-defined networks. Cisco Jasper is the dominant commercial CMP for mobile network operators worldwide and had about 75 million connections at the end of 2017. Other major vendors include Ericsson, Huawei, Amdocs, Comarch, as well as Nokia that launched its Nokia WING service in Q1-2017. Start-ups such as EMnify, Flo Live and Soracom have introduced cloud-based core networks dedicated for IoT that are offered as a service.

A number of major mobile operators continue to invest in the development of their proprietary platforms to differentiate from the competition. Vodafone’s Managed IoT Connectivity Platform stands out as the leading proprietary connectivity management platform with about 67 million connections at the end of 2017. CMPs are also a key component in the value proposition from IoT managed service providers. Aeris and KORE have consolidated their positions as leading players in this segment, with 10 million and 9 million connections respectively at the end of 2017. 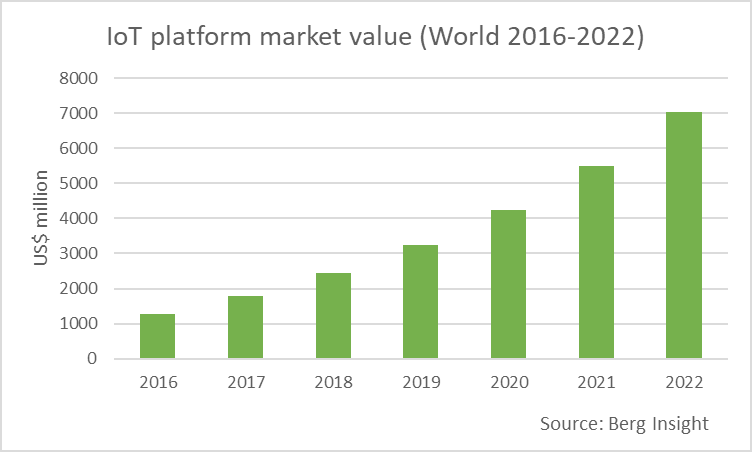 The application enablement platform market is fragmented and populated by a host of start-ups, as well as major companies from the technology and industrial sectors. These companies have developed offerings that typically have a specific focus on a set of capabilities, often related to their core business. GE and PTC spearheaded the effort of promoting IoT in the industrial sector on a broader scale. While GE has shifted focus to mainly provide solutions rather than its Predix platform alone, PTC has emerged as the leader in the space.