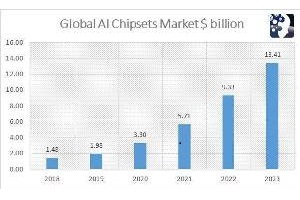 Semiconductors power the electronically pervasive modern world. Artificial Intelligence (AI) is destined to support a vast number of technologies ranging from self-driving vehicles to social media analytics. The combination of AI with semiconductors represents a logical next step for silicon providers to embed AI into virtually anything that requires a processor says the author Gerry Christensen, founder and CEO of Mind Commerce.

AI chipsets also support the industry move towards heterogeneous computing refers to systems that use more than one kind of processor or cores. This approach involves integration of dissimilar chips in a co-processing environment to establish performance gains and save energy. In the case of AI chips, processors can often solve problems that traditional processors cannot.

Leading manufacturers are developing solutions to solve industry problems. For example, ARM is building AI into their Machine Learning (ML) Processor to speed-up critical functions for industry such as facial recognition for public safety and homeland security.

This same chipset can enhance other industry needs such as machine translation. This approach is part of System on a Chip (SoC) deployments that incorporate different processors types such as Graphical Processing Units (GPU), which optimise image identification calculations.

Some companies are focused on solving device specific issues such as Qualcomm and Huawei, which are both racing to deliver the first AI chipsets for smartphones. The companies recognise that network developments such as Mobile Edge Computing (MEC) and 5G will drive increasingly more data usage, much of which will be for latency-sensitive services such as Virtual Reality (VR). Handset manufacturers do not want to be the weak link in data processing.

Accordingly, Huawei is designing a chip that can purportedly enable recognition of 4,500 images a minute, more than double the capability of its previous offering. Faster image recognition for smartphones translates into lower overall latency for next generation applications for public safety such as vehicle to person.

Smartphones may integrate with on-board vehicle sensors and cameras to detect potential hazards such as a pedestrian about to run into a cross walk. AI chipsets will power automobile related features as well as many other industries.

Unmanned Aerial Vehicles (UAV) equipped with AI chipsets will benefit by improved sensor-input based decisions. This will be a boon for industry verticals that will come to rely upon UAVs such as agriculture where decisions such as spraying crops for thirty more minutes may make the difference between acceptable yields or an annual loss.

In addition, processors may provide critical decisions for drone safety such as avoiding overhead powerlines or returning to base in anticipation of a coming electrical storm.

The vast majority of use cases will involve some aspect of Internet of Things (IoT) solutions. For example, research associated with the AI Chipsets for Wireless Networks and Devices, Cloud and Next Generation Computing, IoT, and Big Data Analytics 2018 – 2023 report indicates that IoT related solutions will represent 83% of the entire global AI chipsets market by 2023. The AI chipset supported IoT device market alone represents an US $8.7 billion (€7.49 billion) global opportunity by 2023.

Driven by everything from home entertainment to homeland security, the global AI chipset market as a whole is anticipated to reach US $13.4 billion (€11.53 billion) by 2023. 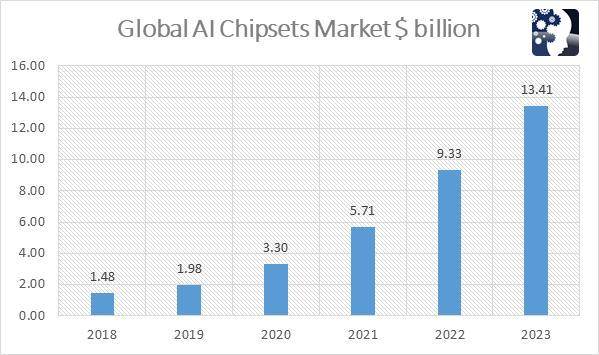 AI chipsets also support Big Data and advanced analytics, many of which will be IoT related such as monitoring and logistics. Multi-processor AI chipsets learn from the environment, users, and machines to uncover hidden pattern among data, predict actionable insight, and perform actions based on specific situations.

This will translate into the next wave of on-device based analytics, which will be important for many industry verticals such as manufacturing in which AI chipset supported decisions for material movements will represent a US $394 million (€339.05 million)global opportunity by 2023.

The overall outlook for AI chipsets is bright as artificial intelligence as a whole is increasingly integrated in many areas including internet search, entertainment, commerce applications, content optimisation, and robotics. The long-term prospect for AI Chipsets is that they will become embedded in many different other technologies and provide autonomous decision making on behalf of humans, both directly, and indirectly through many processes, products, and services.

The author of this blog is Gerry Christensen, founder and CEO of Mind Commerce.