Home › Blogs › Telcos desperately turning to value-added ICT services for revenue growth, but can they do this well? 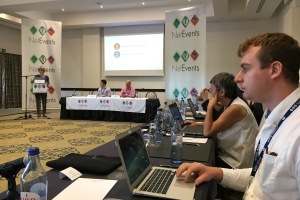 “Telcos could talk to enterprise customers about applications and security,” one vendor advises.
“And I could become a Princess,” says one analyst sarcastically.

As revenues from core connectivity services continue to collapse many network operators are turning to other value-added services (VAS) to shore up their balance sheets.But, as Jeremy Cowan reports from NetEvents’ Press & Analyst Spotlight (#NetEvents18) in Albufeira, Portugal (September 27-28th, 2018) information and communications technology (ICT) can be hard to manage and few telcos are doing it well.

In research presented to the 35 analysts and media invited to Faro by NetEvents, Catherine Hammond, principal analyst at Analysys Mason, showed the importance of this revenue stream. Analysys Mason estimates that operators’ total revenue from all services in 2017 was €93 billion, yet the analyst firm believes that value-added ICT services accounted for €8 billion within that total. Traditional connectivity earnings are falling (down 3.4% in the 1H 2018, compared to 1H 2017), yet ICT revenues grew 6.7% in the same period.

No wonder, then that communication service providers are re-focusing on this area. The problem is, says Hammond, “very few of them are doing it well”.

These services include managed hybrid cloud, multi-cloud, managed private and public cloud, co-location & hosting, Infrastructure as a Service (IaaS) and Platform as a Service (PaaS). Wrapped around this are Professional Services and Service Level Agreement (SLA) services.

The appeal is obvious when you see the slide from Analysys Mason showing revenue growth rates for telco cloud services running at between 5% and 45% per year, depending on which operator you look at. But revenue is growing much faster for tech players than for operators, paling by comparison with the 45% to 100% per year growth achieved by non-telcos offering public IaaS (See photo 3).

Where is it going wrong?

There’s wide agreement that, in theory, service providers can bring real benefits to enterprise customers by supporting them in managing IT complexity. But there is a well-known shortage in the market of the right skills, the necessary experienced people. And it’s often mentioned sotto voce that they don’t generally want to work for telcos which are seen as rigid, unrewarding and rules-based.

Says Atchison Frazer, marketing head of SD-WAN solution vendor Versa, “We spend a lot of time building out architecture to take out complexity. Typically a licence is over 3-5 years. Professional Services come into the mix in years 2 and 3, particularly in security because of the amount of Threat Intelligence they can take from the data.”

Can they do it at all?

“So should professional services be offered by service providers?” Catherine Hammond asks.

Philip Griffiths, head of EMEA Partnerships at NetFoundry, looks at it constructively while assuming they may not have the skills internally. “If they don’t want to become a system integrator, they’ll have to have strong partnerships.

From the floor comes a question from experienced ICT watcher and well-known metaphorical bomb-thrower, Greg Ferro of Packet Pushers. “Can SD-WAN over the internet replace the misery that is telcos?” Perhaps it’s more of a rhetorical question.

“They need to pivot their business to what the customer wants,” says Griffiths emolliently.

“If telcos can just become miserable utilities can they deliver the IT capabilities?”

“They could acquire an SI, or a technology start-up offering some of these services,” suggests Griffiths. This is a model that has been followed extensively by telcos such as  Telefonica  and Tata.

“But no-one over the age of 25 will buy their services from a telco like Proximus,” says a Belgian analyst.

“They could if telcos change their organisation,” Griffiths insists.

Ferro jumps back in. “A lot of companies are taking SD-WAN back off their telcos, they want nothing to do with telcos. They’re building open platforms to bid on bandwidth.”

Frazer laughs, “Telcos don’t need to touch anything. They can just sell licences, the software does it all.”

Griffiths again: “Telcos must talk to clients about their application and security needs.”

“And I could become a Princess,” scoffs Ferro. He may be the least Princess-y person in the room.

“We haven’t got enough time to debate that!” laughs Frazer.