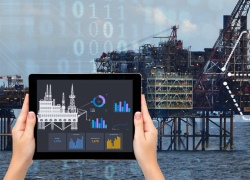 The Internet of Things (IoT) has not left out any industry with its challenges and has paved a way for them to come out with more opportunities.

With its ongoing operations in the onshore transportation of oil and gas, IoT has also embarked its footprints in offshore rig monitoring and brought the challenges of the oil and gas industry as opportunities to grow further says Sanjeev Verma chief executive officer of Biz4Intellia.

When it comes to offshore in the oil and gas industry, monitoring pipelines was a challenge as most of the equipment are below sea level. Various equipment like interconnects, machinery and other expensive equipment around the starting point for a pipeline also need to be inspected regularly.

Although sensors helped in monitoring the malfunctions or discrepancies but instrumenting every feet of pipeline with these sensors was not an efficient or cost-effective solution. To provide maintenance to machinery and subsea pipelines, operators need to have enough understanding of the conditions below sea level.

Long ago, to check the health of a rig, visual inspection was done. This meant one needed to wait for a particular crack to get it big enough to be seen by a naked eye which was not an ideal solution.

Remote Monitoring plays a vital role in the entire oil and gas industry by providing ultra-sensitive sensors that detect the possible malfunctioning very early and the change in frequency triggers the inspection. The data collected from sensors gets transferred to control rooms for further processing and analysing.

Later on, it gets combined with hind cast weather conditions which gives a deep understanding of the change in frequency and assist in determining a long-term structural integrity management plan. With the help of comprehensive rig monitoring system, an insight into the entire rig is obtained from the site data which improves the accuracy and speed of decision making for a higher level of operational efficiency.

The comprehensive system gives immediate access to rig personnel and critical data that impact the operational performance. 92% of shutdowns are unplanned and downtime is most costly when it’s unexpected. The sudden shutdowns cost oil and gas companies an average of $42 million (€36.52 million) a year and up to $88 million (€76.52 million) a year in worst-case scenario.

Few of the recent observational studies show that worn equipment, broken machines, rusty tanks and other evidence of wear and tear were some of the common attributes that lead to the unplanned shutdowns. With careful monitoring, these unplanned shutdowns can be predicted well before time.

Various attributes like caught-in/caught-between/struck-by hazards play a vital role in most of the on-site fatalities in oil and gas extraction. From a statistics report from various sources like from working equipment, moving vehicles, equipment failure, and high-pressure lines show that oil and gas extraction is a very dangerous process with the very hazardous working environment, especially for lone workers.

The IoT sensors monitor the asset performance and help in boosting the efficiency of the assets. The data being collected by sensors is used to measure failures, response time, and inconsistencies etc. Not only the rig monitoring system often tells about the location where rigs need to be revised on their condition and maintenance which helps workers to take care of their safety and security. The strategies being followed by the system has resulted in significant cost savings and improved worker safety.

The key components being used such as sensors collect data related to the oil quality, gas, temperature, humidity, leakage, flow, and many other factors. Further, IoT gateways gather data from sensors and sent further to the cloud.

With IoT and its real-time monitoring feature, one can-

With integration into real-time data and the worker safety regulations, one can monitor compliance and can demonstrate their adherence to the rules as needed.

After analysing the data across worksites, alerts are sent before they affect workers.

As geolocation came into existence with the rig monitoring system, one can track the real-time location of worker and can alert them, for example, do not enter into the particular areas/danger zone.

In a situation where disaster is about to happen, one can collect critical data in real-time, so that better rescue operations can be planned further.

Undoubtedly, IoT has played a key role in transforming the offshore Rig Monitoring. Much of the work in Offshore Rig takes place in remote locations where tracking of assets is difficult. But IoT has the power to connect every aspect of the oil and gas operations, resulting in real-time data analytics, predictive maintenance, asset management and health and safety for faster decision making and a safer working environment.