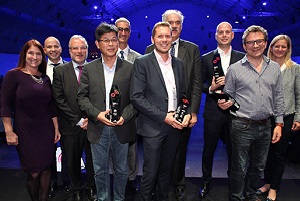 Huawei, IoTerop–Synox and Nokia were this year’s winning companies at the IoT Awards held at IoT Solutions World Congress (IoTSWC), the providing international industrial internet event organised by Fira de Barcelona in recognition of the best projects developed in the field of the industrial internet throughout the last year.

Similarly, the solution jointly developed by Intel, ARM and Pelion enabling users to connect any IoT device to the cloud in a matter of seconds received the award for the best testbed at the show, which is being held for the fourth time until this afternoon at Fira de Barcelona’s Gran Via venue.

In the Business Transformation category the award went to the Huawei OceanConnect IoV (Internet of Vehicles) platform applied by the Groupe PSA car firm. This platform makes vehicles smart by transmitting data to the cloud securely, reliably and efficiently, transforms the service provided by car manufacturers and contributes to the development of smart transport.

The Industry Award went to the system for non-intrusive industrial monitoring at nuclear plants, based on smart cameras built by the IoTerop and Synox companies for Électricité de France EDF, the providing electricity generation and distribution company in France. This IoT solution is capable of managing assets and optimising the existing equipment and maintenance tasks at the EDF Golfech nuclear plant in real time.

Nokia’s “Sensing as a Service” project won the award in the Innovative Technology category. This is a platform developed for Cellcom, a regional wireless service provider in the USA, which collects and processes data from sensors in real time and sells it in a marketplace managed on the blockchain platform. The information collected includes environmental data and data for predicting anomalies in the industrial environment, controlling hardware and monitoring production plants.

The IoT Awards also presented an award to the best of the 10 testbeds exhibited this year at IoT Solutions World Congress. The jury decided that the winner was the solution developed by Intel, ARM and Pelion for Hitachi and Infosim, enabling its operators to plug in, connect and use any device on IoT platforms in a matter of seconds. This prototype is highly innovative, as it currently takes between 20 and 40 minutes to configure an IoT device and provision it in a cloud management system and, in most cases, prior configuration by the manufacturer or manual configuration by a qualified installer is required.

Among the finalist companies of this year’s IoT Awards were Serimag, Libelium, Tellmeplus, Witrac, Neuron Soundware, Huawei Technology, Dassault Systèmes and Nymea. The IoT Solutions Awards Gala was held in the Italian Pavilion at the Montjuïc venue and brought together the main actors in the international industrial internet field.