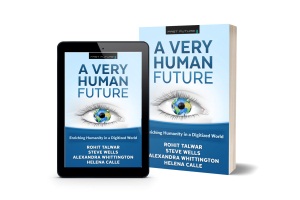 This is a big book, not only the number of pages, but mainly the breadth of its theme, which is huge: “how we can and should retain humanity in the face of disruptive technology”.

That may sound somewhat pretentious, but the authors address the numerous interrelated issues and concerns by conveying objective, detailed information. There are no predications or judgements, no contentious statements.

It’s an easy read, because of the style and the structure. There are seven sections that divide into short, easily digestible chapters, but there is way too much to take in at a single sitting. I needed to read and then reflect and I also jumped to parts in which I was particularly interested.

That led to the idea of the book being a kind of encyclopaedia, something you would go back to at regular intervals to check what the authors had to say about a particular topic, e.g. rethinking the future of women and their ability to manage risks and challenges.

Advanced technologies like Artificial Intelligence (AI) are enabled by computer processing power, which Moore’s Law tells us will be 128 times more powerful than today. Organisations will therefore need to bring exponential ideas into their thinking.

As one might expect, the book states that the underlying force driving much of the concern about humanity’s prospects is the relentless pace of development of a range of exponentially advancing technologies such as AI.

What sets AI aside is its ability to learn, evolve autonomously and make its own decisions, hence the current debate about loss of jobs. However the debate may come down to the simple, key issue of who owns the future and what say the ordinary citizen will have in its creation.

At that point I jumped to the chapter on conclusions to see if the authors fleshed out that issue. They didn’t, which is hardly surprising. Instead they outlined a brief manifesto of 12 critical action areas that “we must focus on as individuals, society, businesses, and governments if we are to avoid the risk of being overwhelmed by the scale of change on the horizon”.

The first area was extraordinary leadership, individuals having a vastly expanded set of capabilities along with the need to increase the investment in developing leaders. I’m not holding my breath on that one. The second was digital literacy: individuals, businesses, and governments alike need to acknowledge the central role of digitisation in all our futures. It’s happening. The third area was education systems: across the globe, education systems, corporate learning programs, and adult education provision need upgrading. Agreed.

I’m jumping to the twelfth area: a very human dialogue because it encapsulates the ground that this tour de force publication covers. The debate about whether particular advances harm or advance society’s interests will rumble on, the key here is to maintain an open public dialogue. The challenge is to raise literacy levels and public awareness of the issues, so we can bring more citizens into the discussion to share their views on what society needs and wants as compared to what technology makes possible. Q.E.D.

This book is reviewed by freelance technology writer, Bob Emmerson