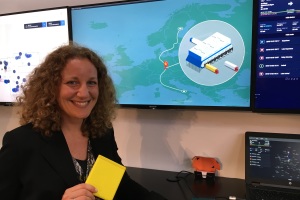 If I say Sony, I’d bet the first subjects that come to your mind are not healthcare or logistics management. Yet these are two key areas that Sony’s Sweden-based Internet of Things (IoT) team focused on at the recent IoT Solutions World Congress (IOTSWC18) in Barcelona, as Jeremy Cowan reports.

In 2015 the company’s competence in connectivity and 5G communications, plus a less well-publicised track record in Machine Learning and positioning algorithms, drove the Japan-based electronics giant into IoT research and development.

One of the results is Mobiam, Sony’s mobile asset management solution now in trial with Lund University in Sweden. Cold chain management (CCM) is not only important for businesses and the environment to minimise food waste, it is vital for avoiding the Blame Game that Sandwang says is all too common in the logistics chain when a product arrives in poor condition and no-one can prove where the fault lies.

“Cold chain logistics can involve many truck and van transfers,” says Sandwang, “so we built a prototype (solution) to follow the product, not the vehicle. We created boxes with a modem, GPS (global positioning system), accelerometer and temperature sensors. This is not just a cold chain problem, shippers need it for steel or paper, to know where it is and in what condition. Fleet management systems don’t show how the cargo is and signing a receipt means accepting the goods that may be damaged when opened and inspected.”

The system is now in trials, and Sony used the Barcelona event to show when a freight forwarder picks up the goods. This was a live connection to a real shipment of car parts from Copenhagen, Denmark to Manchester, UK via the ports of Gothenburg and Hull. Alarms are triggered for any cargoes that exceed programmed temperature and humidity ranges, or where boxes tilt, fall or are handled without due care.

For example, Sony also showed a shipment of paper being carried from Finland to Prague in the Czech Republic. If a cargo is diverted, say through the need for urgent truck repairs, Machine Learning (ML) enables the system to anticipate and alert the customer that delivery will be delayed. The customer is informed pro-actively.

There is a pressing need within the industry for secure data exchange in important and high value transactions. This, or course, includes transportation and vehicle movements (but applies just as much to IoT communications in Industry 4.0, smart cities, and finance). However, cybersecurity is only as good as the weakest link and some networks don’t enforce security between IoT devices and communication gateways. Sometimes data protection is applied at the gateway, only protecting communications between the gateway and the receiving endpoint.

According to a two-year-old, UK-based company called Crypto Quantique, now emerging from a “stealth” phase of research & development, this scenario leaves a gaping hole in the IoT network that can be exploited by attackers over-hearing communication between device and gateway.

CEO, Dr Shahram Mossayebi, told IoT Now, “There are two principle issues in providing practical end-to-end cybersecurity in the IoT; the first is the ‘root of trust’, the ability for a device to authenticate itself and be a trusted member of a network. Today this is the weakest link. (Issue) number two is the cryptographic and security foundation to enable safe data passage and functional operation of IoT networks. This relies on proving ownership of the root of trust.”

There are problems if two parties that have not previously connected with the server want to communicate. What is this root of trust? Where does it come from? And how can the server recognise it over the public internet?

The solution, according to Crypto Quantique is their new Quantum Driven Secure Chip (QDSC) on semiconductor silicon. Mossayebi claimed it is a world first; and added, “each QDSC is unique and equipped with a wide set of unclonable encryption keys by definition, not installation. Because of the way the keys are generated there is no requirement to store the keys, they can be retried on demand.

One Advantech partner, Sioux Lime, based in Eindhoven, The Netherlands, has skills ranging from automated guided vehicles through fleet management systems to vehicle monitoring and maintenance.

Fleetlogic collaborates with Sioux on fleet management and after-market solutions. Sioux focuses on roadmap and technology development, Fleetlogic on sales and marketing. Sioux has taken over the initial R & D department of Fleetlogic.

The company is also behind smart algorithms for pantographs monitoring and maintenance. By finding out in time whether pantographs on trains require maintenance, costs can be cut and safety improved. Sioux has developed complex algorithms for fast image recognition and analysis and integrated into an existing camera system that monitors driving trains.

Finally, IoT Now talked to Hitachi Vantara’s Wael Elrifai on a range of topics including transport and logistics.

The VP for Solution Engineering in Big Data, IoT & AI, tells us: “Hitachi makes everything; Proton Beam Therapy, cars, trains and nuclear sites. Trains are a CapEx (capital expenditure) model, operators want better cost control so now we supply Trains as a Service (TaaS). Therefore, it’s in our interest to provide fewer trains so we have to reduce unscheduled downtime.

“Each (train) car can have 3,000 sensors – that’s 48,000 sensors per trainset. It’ not engine failure but doors that are the biggest problem,” says Elrifai. “These and toilet failure predictions are critical. Trains are 40-year lifespan assets and a two-year-old train has a different data profile to a three-year-old one. Predictive maintenance benefits are seen in Years 5, 10, and 20, not in Year One.”

Justin Bean, Hitachi Insight Group’s director of Marketing for Smart Spaces & Video Intelligence, adds: “TaaS is only possible because of this data and IoT. So we’re aligning our company interests with a rider on the trains. In old times, car and train manufacturers benefited from not giving the best vehicles to dealers.” “So, how much of Hitachi Vantara’s revenue comes from XaaS?” IoT Now asks.

“We’re in the early stages,” is all Bean will say. “As train manufacturers of the future we now want the minimum number of trains and maximum productivity. We won’t talk percentages, but we have to disrupt ourselves as a company. Everything we do must be aligned to consumer needs. Now we are often the OEM (original equipment maker) in larger components; it can be up to 30% of a car that comes from Hitachi.”