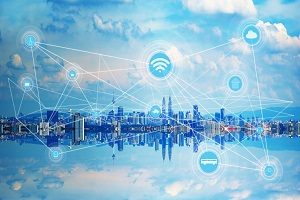 Internet of Things IoT Businesses across the globe are working on their game plans for long-term Internet of Things (IoT) deployments. IT teams are now faced with managing a network that extends well beyond the traditional boundaries of fixed locations.

Using wireless as a primary wide area network (WAN) link, says Donna Johnson, VP of product and solution marketing at Cradlepoint, will be crucial in supporting this shift, and will help organisations accelerate and secure IoT deployment in the long run.

For many businesses, connecting, managing, and securing the ever-increasing volumes of IoT devices and data comes with daunting challenges. IoT is an integral part of a wider shift in enterprise networking – from a fixed edge in offices, stores and restaurants, to an elastic edge, expanding how businesses work and interact with customers.

This change is beyond physical; it’s a change in how and where businesses seek connectivity. It is important, therefore, to look at which types of connectivity meet these changing needs – from Multiprotocol Label Switching (MPLS) to broadband and now wireless. For many businesses, an important part of this elastic shift is considering 4G LTE, and soon 5G, as essential wide-area network (WAN) infrastructure.

For a more agile IoT-focused environment, the wireless WAN is faster, cheaper and offers a simplified lifecycle that requires less IT resources to manage and a lower total cost of ownership. Developing wireless WAN infrastructure – particularly as we move closer to 5G – will help companies accelerate their IoT deployments while maintaining security and visibility.

Many businesses are already betting on LTE. A recent Cradlepoint report, The State of the Network, found that 60% of companies are already deploying LTE, with half reporting increased flexibility and agility, and 39% increased redundancy and reliability.

It’s easy to see why. LTE is fast, and getting faster. In 2018, LTE Cat 11/12 is already rivalling digital subscriber lines (DSL) and cable, capable of reaching speeds of up to 600Mbps. In 2019, for the first time the industry will see gigabit speeds, with LTE Cat 18 offering up to 1.2Gbps. When 5G arrives in 2020, speeds will begin to exceed an astonishing 10Gbps. Significantly for businesses looking to make the change, LTE is global. The pervasive nature of continued LTE investment means no matter where a business may choose to operate in the future, it will have access to a fast, reliable LTE connection.

LTE technology has developed rapidly in recent years, and continues to do so as we move along the pathway to 5G. It can be easy to recall a negative experience with wireless from only a few years ago – issues with lack of coverage, speed impacting application quality, or significant overage charges impacting cost-effectiveness – and base future planning on historical bias. In nearly all cases, these types of concerns are completely unfounded.

LTE is fast and highly available – and harnessing multiple LTE providers can provide redundancy in cases where connectivity to one carrier is impacted. Carriers are also invested in LTE’s success as an enterprise link, and offer roll over plans, data pooling and sharing capability to ensure enterprise use is cost effective. Wireless also provides a host of additional benefits for IoT compared to wired connections. It’s flexible – devices can be moved, rather than being tied to a fixed location, and the network exists already, so turn-up times are negligible – it’s always ready to go.

Digital transformation is exposing the long-standing challenges of the traditional WAN. The cost of MPLS and limited bandwidth, a lack of business agility, escalating complexity and outmoded security – all of these challenges and more mean the traditional WAN is not suited to an IoT-focused age. Software-defined WAN (SD-WAN) capabilities are addressing these challenges, making use of multiple WAN links, policy-based traffic steering and orchestration spanning the entire WAN – from fixed sites to IoT.

With IoT being one of the most challenging security issues facing IT teams, SD-WAN capabilities are becoming vital. The seemingly limitless opportunities for enterprises to collect and leverage data, streamline business operations, and even improve customer service is difficult to ignore.

At the same time, the process of connecting, managing, and securing IoT devices and data that are located all over the world comes with unique challenges. Perhaps the biggest challenge is completely separating IoT devices from sensitive data, such as Point-of-Sale information, and other networks, including the corporate WAN. If a system is compromised, IT teams need to ensure the intruder can’t hop over to another network.

This challenge requires overlay networks that can provide the connection between IoT devices and the cloud, and that utilise a secure private IP address space. Software-defined Perimeter (SDP) technology enables IT teams to set up perimeter-secured overlay networks with just a handful of simple steps that can be completed within a matter of minutes. It’s a simple solution to a complex problem.

Take a common scenario: the IT team needs to secure a variety of IoT devices connected on the network via a router. LAN-connected devices – for example digital signs or surveillance cameras – can be placed on an overlay network that isolates IoT data from the Internet and other networks. Behind a gateway, any IP-based device can be connected to the overlay network without any additional software. These overlay networks provide a cloud-based VPN alternative for IoT use cases and the people who interact with them. They can be created, configured, and scaled in just a few minutes cost-effectively.

The combination of wireless and SD-WAN will be central to accelerating IoT deployments for many businesses in the long term. It is a flexible and cost effective solution to a problem that demands speed and agility. The answer to the IoT question is simple, but it starts with flipping the traditional enterprise network model upside down.

The author is Donna Johnson, VP of product and solution marketing at Cradlepoint