Can the IoT save the High Street? Yes, if it concentrates on the basics - IoT Now - How to run an IoT enabled business

Home › Blogs › Can the IoT save the High Street? Yes, if it concentrates on the basics 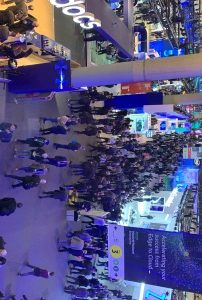 Like anyone who wants to keep up with IoT fashions, says freelance technology writer, Nick Booth, I spend a lot of time shopping for ideas.

I don’t care how many boxing day sales riots you’ve witnessed, you haven’t seen crowd madness until you’ve experienced ‘FIRA Frenzy’ at the annual Mobile World Congress in Barcelona. This vast, out-of-town emporium now seems to attract every vendor in the world and they all seem to want to cram a whole year’s worth of marketing effort into four days.

For that reason some industry watchers, such as Dean Bubley of Disruptive Analysis, say they prefer smaller boutique events like Embedded World in Nuremberg and Enterprise Connect in Orlando.

All these IoT shopping events can blitz your memory in hours. The only way the human brain can rationalise the input is to hit the local shops for a few hours. A bit of shopping allows you to subconsciously process all those presentations before you return to the show refreshed and slightly less confused.

But there is a problem. All the local shops are awful. There’s no therapeutic value whatsoever in most shopping centres, unless you like watching businesses slowly die.

In the UK, America, Spain and everywhere else in the corporate jargon speaking world, department stores are being wiped out. Macy’s is closing stores from Wyoming to Washington. Even the shopping malls of California, a state whose economy is the fifth richest in the world, are dying out. You’d have thought all those Silicon Valley coders would do anything to escape the drudgery of their deskbound existence, but no, they’re all shopping online. Which is why other retail chains such as Nordstrom and JC Penney are shrinking back to nothing.

According to Credit Suisse’s latest report on commercial mortgage-backed securities, the 2019 Year Ahead Outlook, retail shrinkage will accelerate. “Retail bankruptcies and store closures will not abate and we will likely see another wave hit, early this year, following the holiday selling season,” says the report.

Estate agents in any country always describe the high street as the ‘heart of the community’. However, the technology industry has performed one of its dystopian disruptions and performed a community heart bypass. All the money the public spends is diverted into tax havens and never seen again.

IoT to the rescue?

Let’s hope that the good people from the IoT industry can rescue us from this tyranny. Obviously, some of the factors killing the high street are beyond technology, such as local council legislation and tax policy. But retailers could be using their brains or and their brawn more purposefully.

Dave Locke, EMEA CTO at World Wide Technology, insists that it’s possible to re-invigorate the retailers without painful surgery. The retailers aren’t using their existing IoT infrastructure properly and they are misinterpreting the masses of data they have to hand.

They should concentrate on the simple things. Typically, most retailers waste a fifth of the comms budget supporting their IoT network, according to Worldwide Technology. This wastage is caused by a mish mash of contrasting service provider contracts, characterised by outdated agreements to use technologies such as fixed lines and MPLS.

It’s ironic that high street retailers are being stung by the networking equivalent of those bogus BOGOF (buy-one-get-one-free) deals that supermarkets like to bamboozle customers with. Locke claims that a big data analysis of comms expenditure would reveal that most retailers are wasting money on bad utilisation of technology, billing errors and terrible interconnection routes.

The irony is that the money they spend on cameras and databases and analysis, in order to boost shop floor sales, massively overshadows any gains. For every extra pound gained by timely upselling interventions, they are wasting ten on mismanaged infrastructure.

It’s all a question of priorities and this is a point that IoT representatives need to impress on decision makers at boardroom level. “The IoT means everything to everyone,” says Locke, “but not everyone is right. It should not just be a collection of data points but an insightful analysis.”

Meanwhile, Rackspace claims says the herd is moving in the other direction. Retailers seem to be doing more of the things that haven’t reversed their decline so far. Such as drive more traffic to websites, create omnichannel customer experiences and implement new consumer-facing technologies, like VR and AR.

The hard bit is working out what to do, when the herd all seems to be moving in the wrong way. There is confidence in numbers. But one thing that shopping has taught us is that there’s nothing madder than a crowd.

The author, Nick Booth is a freelance technology writer.