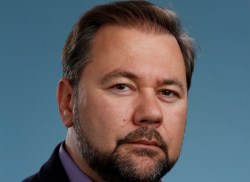 Nikita Ivanov, co-founder and CTO, GridGain Systems tells IoT Now’s Jeremy Cowan how important it is to delegate, and how data may subsidise our future cars.

Nikita Ivanov: Since I was about 14, I wanted to be a software engineer, and I began programming around that age. In Russia, where I grew up, the PC revolution came later than in the U.S. When it hit in the mid to late 1980s, my whole generation seemed to get sucked into it, and it was a very exciting time.

NI: I have a founder’s personality. I have always tried to move very fast to build new things, but I also worried about every detail and tried to control everything that was happening. This created a lot of stress. When Abe Kleinfeld joined GridGain, I was able to observe how a seasoned CEO manages a company. He keeps an eye on everything, but he is able to take a step back and let some things just work themselves out. This is a very important quality, which I wish my younger self had understood.

NI: I have actually never had what you would call a really bad boss. Over the arc of my career, I’ve really had only six bosses, and I would not have stayed in those positions had the relationship with my boss been an issue.

NI: I’m particularly excited about what is happening in the automotive industry with connected cars. When you think about it, a Tesla is really becoming just a sensory container on wheels. This has the potential to completely change the monetisation strategy for the automotive industry. Over the next 15 to 20 years, the revenue from the information collected by the sensors on cars will likely surpass the revenue from selling the car. At that point, it’s conceivable that individuals will be able to acquire a car with a modest subscription fee as long as they allow the company to use the information it collects. And as IoT becomes ubiquitous, this monetisation strategy could spread to other industries, such as healthcare, which could dramatically reduce healthcare costs.

NI: I wouldn’t say there was just one memorable experience. For me, business travel is about interacting with the very different cultures in countries around the world. Many of my experiences have been positive, but some have also been negative. One thing I always come away with after an international business trip is how lucky we are to be in the West.

NI: I think the biggest lesson is that culture matters, especially when it comes to a company’s internal operations. We like to think that we live in a global society and that there has been a lot of homogenisation. While this process is certainly taking place, if we try to completely ignore cultural differences, especially different ways of communicating, it can be devastating for a business because there are so many touchpoints that can cause friction. GridGain is a global company, with large offices in the U.S. and Russia, as well as other employees around the world, and we have learned a lot about how to navigate cultural differences to minimise the friction.