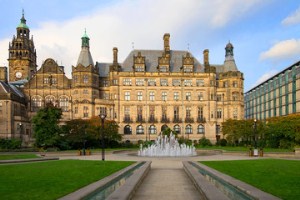 A new project is connecting the UK city of Sheffield’s citizens to a free, superfast Wi-Fi network to overcome the digital divide with “fibre through the air”.

Ruckus Networks, an Arris company, has announced its involvement in Sheffield City’s free-to-use, superfast Wi-Fi project. Working with Idaq Networks, who run the network, and Siklu, a provider of millimetre wave radio technology, the project creates a virtual data ring-road around the city, offering high-speed connectivity.

The project delivers superfast internet, at 20 gigabits per second (Gbps), to 293 streets in the city and up to 24,000 users can connect simultaneously. The network is free, and at no cost to users or to the council who provided exclusive access to street furniture and buildings to install the network. The network can also be leveraged for other commercial opportunities to help fund the service.

As cities across the UK compete to attract tourists and businesses and access the £2.4 billion (€2.7 billion) investment announced during the UK’s Autumn budget for the Transforming Cities Fund, free Wi-Fi is an important part of the equation. “Free Wi-Fi networks are crucial to helping all residents engage with the opportunities available online,” explains Mark Gannon, director, Business Change and Information Solutions (BCIS), Resources Portfolio, Sheffield City Council.

“We believe we have a responsibility to give all residents the ability to access information and services online so they can carry out tasks such as applying for jobs or benefits. It’s also important for supporting our businesses and entrepreneurs as it should increase footfall in the city centre,” Gannon adds.

The network is future-proofed and has the ability to support future council-led projects such as footfall tracking, traffic management, and smart recycling. According to Luke O’Kelly, sales director UK & Ireland, at Siklu, “the solution operates virtually interference free at exceptionally high capacities, so no matter how the city wants to utilise it, the network can adapt and grow.”

“Across the UK, we are seeing councils beginning to understand the potential of smart cities,” says Steve Johnson, regional director of Northern Europe at Ruckus Networks. “However, key to successful outcomes are: implementing the right technology to overcome issues such as interference; creating an easy-to-use end-user experience; and utilising the right commercial model. This project in Sheffield showcases the cutting-edge technology that makes smart cities a reality, bridging the digital divide, and improving the quality of life for residents.”

How the solution works

At the centre of the deployment is a unique combination of Ruckus and Siklu technology that helps overcome network interference (a key challenge of smart cities). High-speed fibre is delivered into one building, the point of presence (PoP) site. Idaq Networks then positioned multiple Siklu radios across a network of tall buildings around the city. The fibre connectivity which is brought into the PoP can then be bounced between these buildings, creating fibre through the air, up to distances of 6 kilometres.

Siklu radios are then used to deliver these signals down to street level, leveraging shorter buildings and even street lights, where a high-capacity wireless connection is delivered into a Ruckus Wi-Fi access point, connecting Sheffield’s citizens.

This deployment method is extremely cost-effective, as it removes the need to physically trench fibre, and is quicker to deploy. Ruckus’ Mesh Network technology also provides an additional backup should a power failure disrupt one of the radios, meaning individual APs are able to connect with each other wirelessly and maintain network connectivity.

Luke O’Kelly, sales director UK & Ireland at Siklu says, “Ruckus technology and this deployment is best in class. If you wanted the Rolls Royce of deployments, this is exactly how you would do it. Our millimetre wave radios are delivering true fibre-like performance at gigabit speeds, but without the need to trench fibre through the streets and disrupt the city.”

For Sheffield City Council, Mark Gannon, director, Business Change and Information Solutions (BCIS), Resources Portfolio comments, “The feedback on this has been very positive, and people are making use of the free access we’re offering. As part of our digital connectivity strategy, it is one of the key tools in our armoury.

While on its own it might not increase footfall or overcome digital exclusion, alongside the other things we are doing, it is a fundamental part of it. We see it as a statement of intent of where we want to be as a city, what our citizens should expect from a leading digital Council and how we see digital as a fundamental part of helping our city and its people to thrive.”

“This deployment is already demonstrating its value to the city,” adds Mark Roebuck, director, Idaq Networks. “Compared to similar projects in other cities, Sheffield’s residents are achieving truly superfast connections, and the network has been utilised at public events in the city. Sheffield asked us to create a family friendly, superfast, free to use and future proofed network, with the help of Ruckus and Siklu that’s exactly what we’ve been able to offer the residents of Sheffield. Off the back of this, we’ve been able to identify and win other commercial opportunities, and run the network in a cost-effective way, creating a model for other cities to adopt in the future, it is a triple win – for the network provider, for the council and most importantly for citizens.”