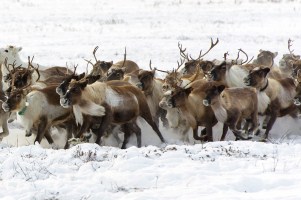 Globalstar Europe Satellite Services Ltd., a wholly-owned subsidiary of Globalstar, Inc. reports that farmers have deployed its new IoT technology solution to track and protect thousands of reindeer in the north of Finland and Sweden.

ReindeerApp enables farmers to keep track of their herds, and helps mitigate losses from predators such as wolves and bears. The user interface which PrismaQualityFinland developed notifies herders when a deer is no longer moving, and thanks to Globalstar’s extensive satellite coverage and accuracy, the farmer knows exactly where to go to check on the animals.

Petter Kroneld, product development manager of PrismaQuality Finland, says, ”When farmers asked us to develop a tracking collar for their reindeer, we knew right away that satellite connectivity would be essential to deliver the reach we needed. We designed the collar around SmartOne C due to its satellite coverage, superior battery life, small size and low cost.”

The SmartOne C’s long battery power means farmers need only change the collars’ batteries during the annual round-up in June, when herds get health checks and new-born fawns are marked to identify who owns them.

Reindeer husbandry has been carried out in Lapland, Northern Finland, and across the northern Scandianvian region by indigenous Sami communities for over a millennium. Descendents of these orginal reindeer farmers continue that tradition today, however modern farming principles are being increasingly adopted.

There is huge economic value from the 200,000 reindeer in Finland including the sale of meat and products made from skin and leather, horn and bone. Reindeer tracking systems based on GSM have been trialled in the past, but inadequate reliability in remote regions, higher price and poor battery life made these systems ineffective.

Beyond Finland, ReindeerApp is also now being used in Sweden, where there are 250,000 reindeer, with deployments expected in Norway, as wel as Russia, where reindeer numbers are in the millions, in Canada to track caribou, and to manage other deer species in Nepal and Mongolia.

”Satellite IoT is transforming industries of all kinds, and applications are limited only by human imagination,” says Robert Clarke, regional sales manager at Globalstar. ”Our state-of-the-art IoT technology, combined with our worldwide fleet of satellites in Low Earth Orbit, is now helping reindeer farmers preserve their livelihoods and their traditional way of life.”