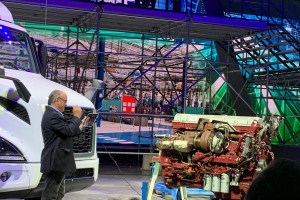 Heppelmann, using a tablet, shows how to check Volvo engines

The keynote address at PTC’s LiveWorx19 event in Boston, Massachusetts is always a tour de force by the company’s ebullient president & CEO, Jim Heppelmann, and today’s conference opening did not disappoint.

As he likes to remind his audience, the PTC boss comes from a CAD (computer-aided design) and PLM (product lifecycle management) background, so for him the marriage with newer technologies such as the Internet of Things (IoT), augmented and virtual reality (AR & VR) is made in heaven.

As Jeremy Cowan reports from Boston, today’s launch was a blend of tech-rock show, a catch-up with friends and partners, and a little bit PTC victory rally. If Heppelmann could fly through it in a barrel roll he surely would. He had the attention of 6,500 at the Boston Convention & Exhibition Centre (not to mention another 4,000 streaming the event worldwide) as he talked them through projects with Volvo Trucks (using Creo Simulation) and air & gas handling firm Howden (with ThingWorx and Microsoft Azure IoT), followed by a chat high on a gantry with Blake Moret, CEO of US industrial giant Rockwell Automation on the progress of their 1-year-old partnership.

The first example Heppelmann showed of work being done with industrial partners was the task of minimising the mass of Volvo Trucks’ engine mounts, without compromising performance. The truck maker is using Creo 5.0, PTC’s CAD system to validate designs and try new design formats. Artificial intelligence (AI) then applies simulations to the designs to optimise criteria. 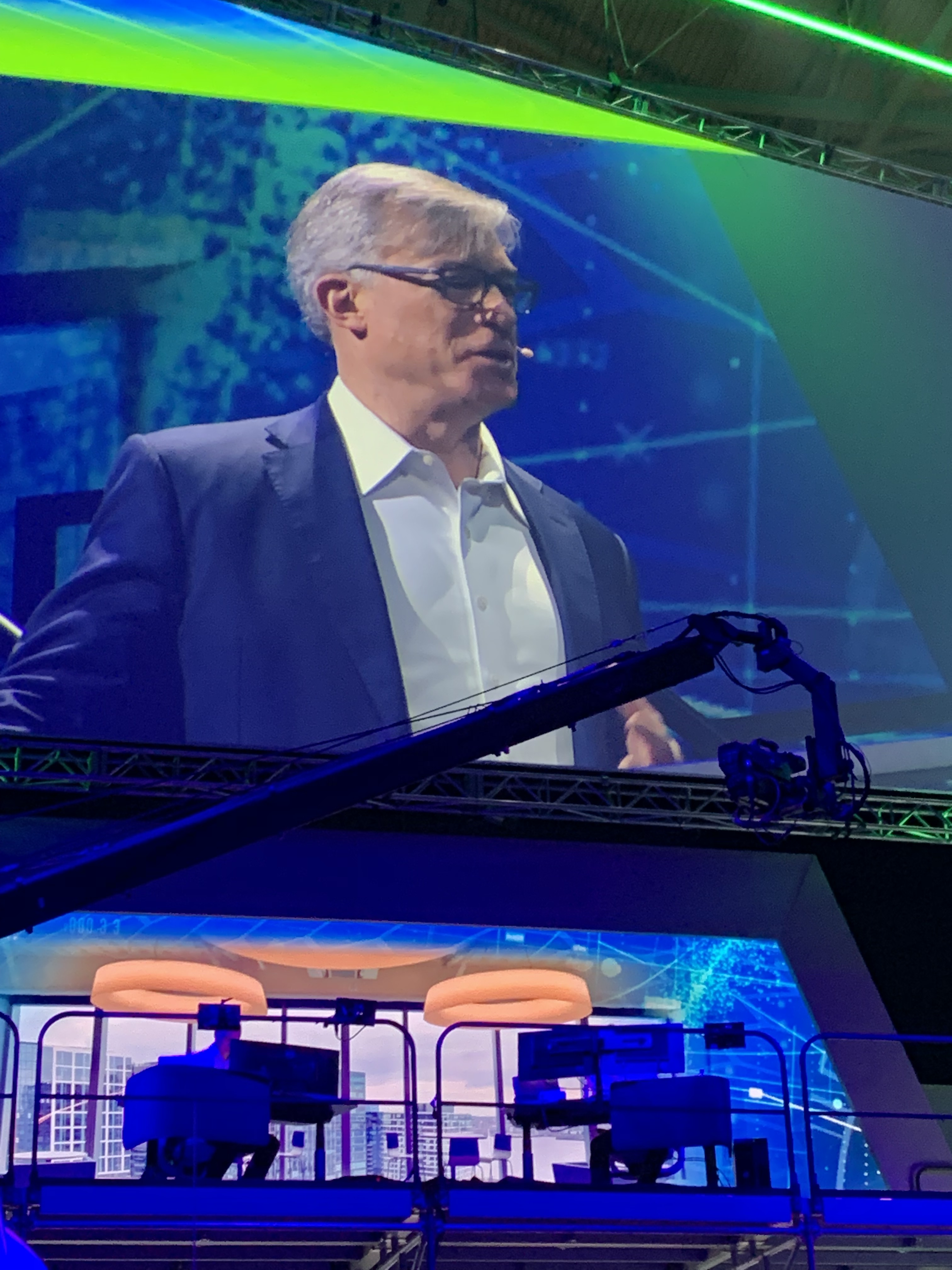 The audience was shown a staffer hard at work at his desk (also perched on high), from where he was achieving an engine mount design that is 50% lighter than the current version. Creo Simulation Live confirms whether he has in any way compromised the design. The engineer moved on to show in Creo the engine digitally installed in its Volvo mount. Says Heppelmann, “I remember it used to take days in the queue to get the attention of the Simulation Team. This takes the pressure off simulation analysts who no longer need to get involved in the design’s early stages and can use higher suites to test later design stages.”

These are the three stages today; generate, iterate, validate. But every new generation of design brings new complexities, as Heppelmann points out. He has been told by Volvo that there are 1080 design variations possible in their combined truck range, with 260,000 trucks built in 2018. So, IoT and AR need Product Lifecycle Management (PLM); the new generation offers Product Variability Management. As Heppelmann asks rhetorically, “How can you have an accurate digital twin if you don’t know what’s in the engine?”

Training is also impacted; training on engine inspection procedures can take up to five weeks. Heppelmann, using a tablet, showed how it is now possible to show someone with no training to check Volvo engines’ cable routing, that clips and zip ties are all in place, or how paint protections caps on an air compressor are in place. It’s about quality as well as cost control, he insists. These are said to be the two key reasons why Volvo is investing in this suite of manufacturing and supply chain management tools. 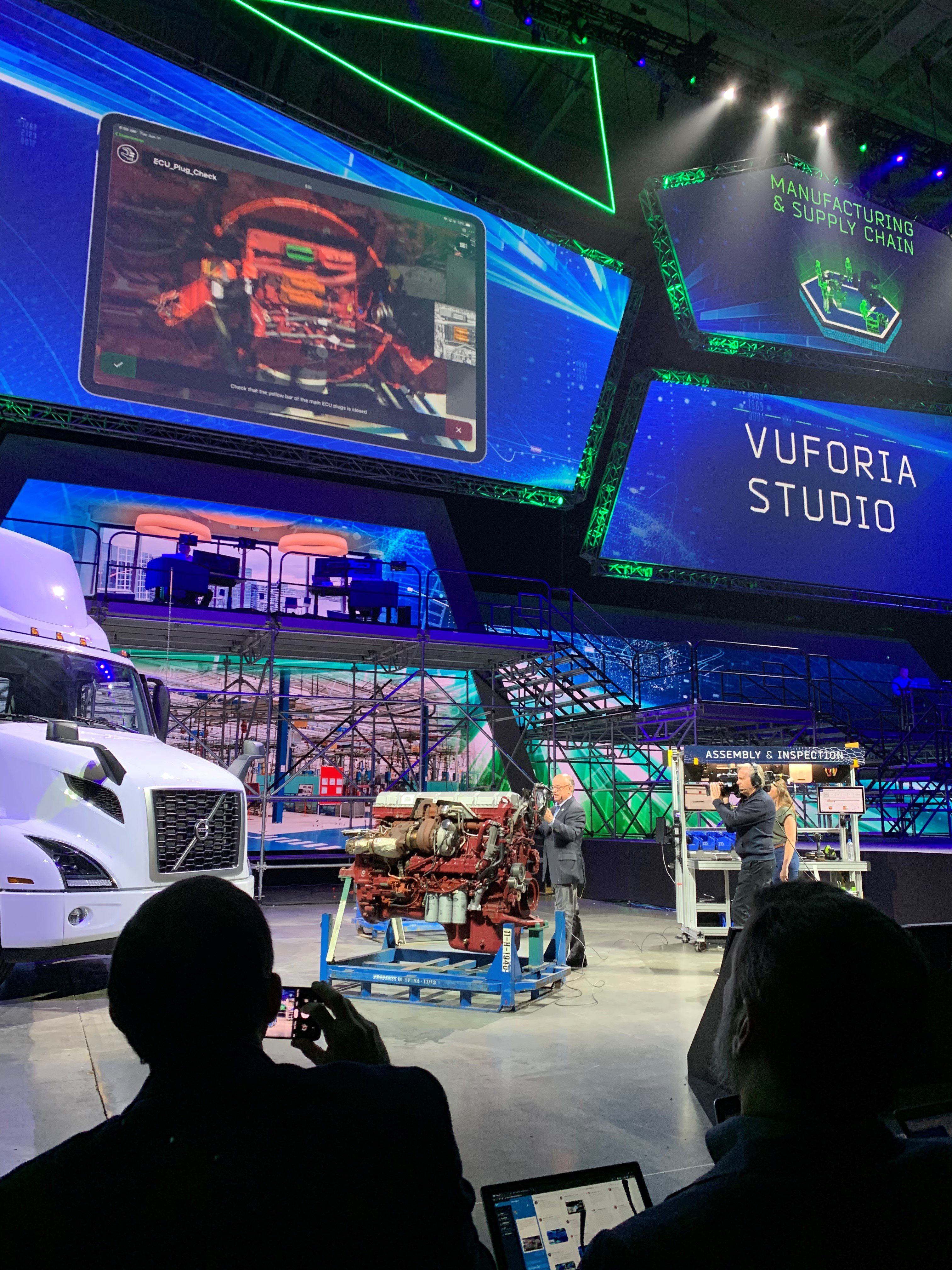 How to retain expertise in the business

There was a teaser for it at last year’s LiveWorx but Vuforia Expert Capture was still in development. This year it is available for companies to capture work procedures, enabling them to incorporate them into training for new staff.

The age-old problem of losing expertise when skilled staff retire or leave the organisation can now be tackled by “bottling” the knowledge, as PTC puts it, through digital transformation. Experienced staff wearing HoloLens, or just carrying a phone or tablet can record the procedures they go through in a given industrial process. The recording, overlaid with instructions, can then be incorporated into knowledge transfer instructing novice operators on best practices.

The PTC president calls Vuforia the world’s first enterprise AR suite, and declares that sales have been growing at over 80% per year for several years, so that Vuforia now represents more than 7% of total PTC software sales.

Another success has emerged from the US$1 billion (€0.88 billion) equity investment in PTC by Rockwell Automation (as IoT Now reported in June 2018, see here). Rockwell’s CEO and chairman, Blake Moret (now also a director of PTC), joined Heppelmann on stage to review the investment. What, asks Heppelmann, has been the reaction from customers?

“For Ford Motor Company,” says Moret, “we’re providing solutions to save money and bring products to market faster. It’s been a great start.” 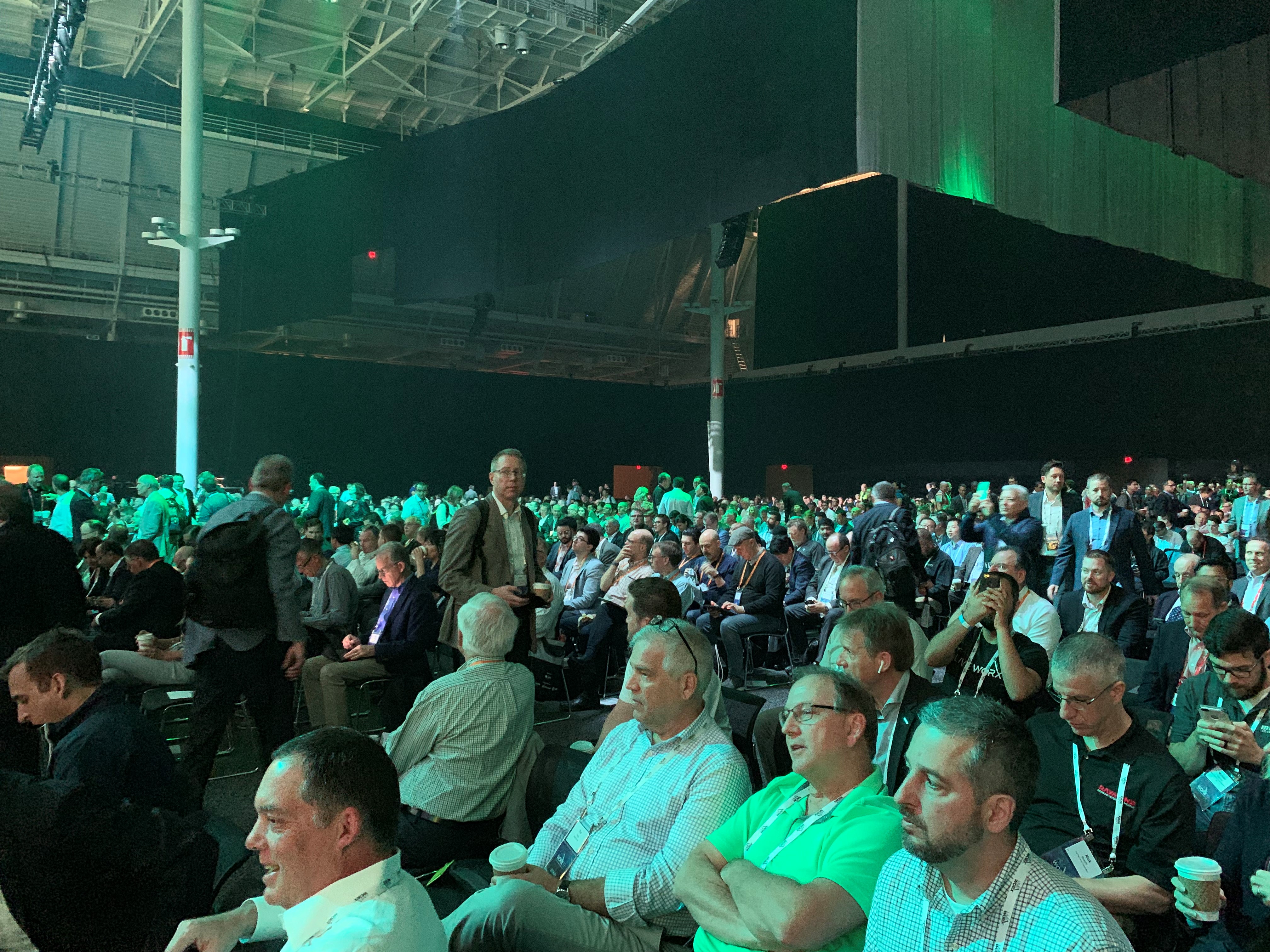 He reports that most sales now are in ‘Brownfield’ sites, factories from different eras, that are now using ThingWorx, for example. “Half the early wins are with software sitting on top of someone else’s systems. Forty percent of the wins have involved augmented reality.”

Later in the day, freelance journalist, Jessica Twentyman, asks Heppelmann for his verdict on the milestones of success in the relationship so far and what’s still on his To Do List? He replies that the companies need to do more to integrate, train and sell together. “This is a ‘Land & Expand’ model. Sure, we want to know you have 20 factories, but we’ll start with just one and prove our value. PTC has already trained 1,500 Rockwell people on Vuforia.

“Blake talked about 1,000 conversations (you could call them salesforce opportunities). That’s a heck of a big pipeline. PTC is sitting on about 4,000 ‘opportunities’ because of its history in IoT. Rockwell is already looking at 1,000 in one year. And 30 projects have already landed. So, in my words not Blake’s, I’d say the partnership is going very well.”

“Not long ago I told him he enjoys total air supremacy in the business of selling digital transformation to factories,” Heppelmann concludes. “There’s nothing anyone else can send up against him that he can’t shoot down.”