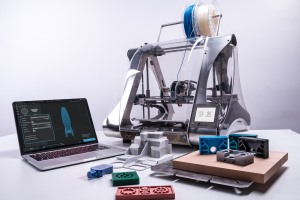 (Sponsored Feature) – Estimations suggest that the smart manufacturing industry is going to conduct significantly more business in the coming years. Specifically, a recent write-up at Yahoo Finance projected that the smart manufacturing market would be worth $384.8 billion (€356.1 billion) within the next five years. That’s up from an expected $214.7 billion (€198.7 billion) at some point this year, which gives some idea of the scope of the expected growth.

A significant portion of that growth is expected to come from 3D printing (which is perhaps what most people envision when considering “smart manufacturing”). And while this particular method can and will serve nearly unlimited purposes, it’s likely to have a lot to do with how the Internet of Things continues to evolve in he coming years. Below, we’re identifying three important aspects of the growing role we expect to see 3D printing playing in the IoT.

Smart devices in people’s homes are going to continue to be at the forefront of the IoT. They’re not necessarily the most important or lucrative products involved, but they are the ones likely to have the most direct impact on consumers in the near future, and are thus, in a sense, some of the most important parts of the IoT. Our blog post on ‘How Smart Devices Will Transform the Next Generation’s Daily Life’ identified some of the specific types of tech we’re talking about, such as immersive entertainment, ubiquitous high-speed connectivity, etc.

As these and other concepts take root in home environments though, they’re going to require innovative and sustainable designs — and 3D printing is already coming through. To date, we’ve seen the technology used in the development of smart speaker casings, intelligent thermostats, and more. So, while 3D printing won’t monopolise all manufacturing in this category, it’s positioned to play a role.

More generally — whether we’re talking about in-home IoT devices or other applications entirely — 3D printing is also likely to be of significant use when it comes to prototyping. While many think of this technology and assume that it is most valuable for mass production, some of its most convenient uses are actually in experimenting with designs so as to get them right before mass production.

Case in point, Fictiv provides some of the details associated with quick, small 3D printing projects. It explains that methods like fused deposition modeling and multi-jet fusion can be used to create custom 3D designs from scratch in just a day or a little more.

This level of convenience is already ideal for people working on new designs for all sorts of products. And with the number of new products the IoT is going to produce in the coming years, 3D printing is highly likely to become a popular modeling and prototyping option.

We mentioned that smart home devices are important because of the direct impact they have on consumers in their day-to-day lives. This is certainly true, but as Electronic Design pointed out in a thorough overview of the IoT, “wireless sensors dominate most IoT applications.”

Already, wireless sensors are responsible for many IoT functions, and in the future — as we see the development of everything from smart cities to better connected healthcare facilities — these sensors are going to be even more important.

And with the intricate design needs some of these small, connected devices require, 3D printing is sometimes the best option. In both prototyping and production, the technology can create exact, reputable designs that will bring about sensors serving all kinds of purposes.

In a few more years, it will likely be all but impossible to name all of the specific devices and sensors 3D printing will have helped produce. In these broad areas though, we can be sure that this particular manufacturing method will play a sizable role in helping to expand the IoT.

The author is Roslyn J. Naylor, an IT consultant with almost a decade of experience. Even when she’s not working on a project, she can be found typing away on her computer and blogging about all things tech.