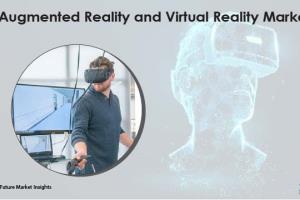 Some of the key players in the global augmented reality and virtual reality (AR & VR) market include names such as Microsoft Corporation, Google Inc., Apple Inc., and Samsung Electronics Co. Ltd. among others.

These companies are heavily investing in the development of the new virtual reality and augmented reality products as a result of which there is an increasingly high demand from multiple sectors and industries including healthcare and gaming. Some of these companies are also financially backing numerous start-ups and offering them required infrastructure as well to advocate this technology among the end users.

Thus, with growing investments by tech companies, the global augmented reality and virtual reality market is expected to experience a considerable over the course of the given forecast period.

The global market for augmented reality and virtual reality stood at an overall valuation of US$5 billion (€4 billion) in the year 2016. This valuation is expected to grow and touch a figure worth US$120 billion (€100 billion) over the course of the given forecast period of 2017 to 2025. With respect to the market value, the global augmented reality and virtual reality market is projected to showcase a staggering compound annual growth rate (CAGR of 42.2% over the same period of forecast.

The global market for augmented reality and virtual reality is estimated to offer an incremental growth opportunity of about US$115 billion (€96 billion) during the mentioned forecast period. Among the numerous device segments, the contribution in terms of revenue from the segment of head mounted display is projected to grow at the highest CAGR of 44% during the aforementioned forecast period.

Presently, North America accounts for a comparatively higher share in terms of revenue of the global market for augmented reality and virtual reality. However, the Middle East and Africa market for AR and VR is projected to showcase the highest CAGR of 55% among all other key geographical regions over the course of the given forecast period. With respect to revenue, the North America market for augmented reality and virtual reality is expected to remain as the most lucrative regional market during the mentioned forecast period of 2017 to 2025.

Uptake of high tech and cutting edge technology in the gaming sector has been on the rise in a considerable manner over the last few years. This growth is also down to the factors such as growing young population, growing spending power of customers on entertainment, increasing penetration of smartphones, and enhanced connectivity of high speed data networks in the emerging economies.

Games based on augmented reality such as Ingress and Pokemon Go have experienced huge popularity among the end users as these games present a standout gaming experience, thus

In addition to this, smartphones not only are the medium for gaming, they also create several opportunities for these augmented reality technologies. It is very hard to create graphical overlays that is able to interact with the real world in an accurately crafted dimensions with the help of computer vision. However, smartphones win over this technological hurdle as these phones are integrate with components such as MEMS sensors, dual cameras, GPS, and accelerometer.

These insights are based on a report on Augmented Reality and Virtual Reality Market by Future Market Insights.