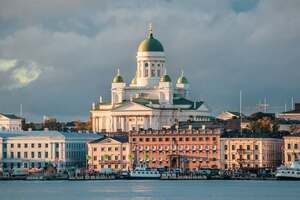 Ten teams have been selected for the final phase of the Helsinki Energy Challenge. The finalist teams highlight the international and interdisciplinary nature of the participants.

They have a wide variety of proposals for how Helsinki can phase out the use of coal for heat production in the most sustainable way possible by 2029. Next, the competition is advancing into the co-creation phase.

In the 252 teams taking part in the Helsinki Energy Challenge, there were 1,528 experts and innovators from across the globe designing potential solutions to the challenge of decarbonising the heating of Helsinki.

The ten proposals selected to advance consist of a diverse set of solutions that have significant potential for further development in the coming phase. Many of the suggested solutions are also scalable to the needs of other cities. Included in the race are several wide-ranging comprehensive solutions, some of which find new ways to combine technologies that are already in use.

There are also competition entries that include entirely new technologies. Among the solutions are new approaches to heat storage and transfer, waste heat utilisation, energy consumption control and consumer activation. Included are also some non-technological innovations that enable the realisation of future sustainable solutions and the combination of centralised and decentralised solutions.

“I launched the Helsinki Energy Challenge to bring the world’s best talent together to consider solutions to Helsinki’s heating challenge. The competition has sparked conversation around the topic on a global scale. It has succeeded in combining wide-ranging international expertise and ambitious problem solving, and we are certain that this collision of different competences will generate new ways of thinking in the future as well.

Our challenge competition has strong international support from different organisations and from several of my fellow mayors, and we will be working together to make sure the solutions that are created are put to use as broadly as possible. Every city must do their part in the fight against global climate change,” says mayor of Helsinki Jan Vapaavuori.

The teams are interdisciplinary and international

The teams that have advanced to the final phase are each made up of 3–20 members and together include 85 experts from a diverse set of fields. The finalists include, and are primarily made up of combinations of, start-ups, large companies, research institutes and universities, as well as international consortia made up of various companies.

The finalist teams represent excellence and a credible combination of various expertise, making them capable of elevating their competing proposals to the next level in the final phase of the competition.

The finalist teams are all European. The selected teams represent organisations from Finland, Sweden, Denmark, Great Britain, Germany, Italy, the Netherlands, Poland, Hungary, Austria and France. Most of the teams include experts and organisations from more than one country.

“When you consider that we received such a large number of proposals and that the competing teams included 1,528 experts from different backgrounds and countries around the world, it becomes clear that the competition includes a very wide range of different solutions. Evaluating these solutions has been more difficult than expected. However, the hard part is now behind us, and the competition is advancing to the next, even more interesting phase.

Currently, the teams’ solutions are only provisional proposals, and each team will receive support and additional information to further develop their proposal in the co-creation phase. We are looking forward to seeing what the finalist teams’ final proposals will look like. They have some impressive and diverse expertise on display, so we are going in with high expectations,” says project director Laura Uuttu-Deschryvere.

The teams selected for the finals are invited to the co-creation phase, during which they will receive support for further development of their solution and additional information to enable them to tailor their idea to the context of Helsinki. At the centre of the co-creation phase is the boot camp in December.

An international panel of judges will evaluate the final competition proposals at the beginning of 2021, and the winner of the competition will be announced in March 2021. The proposals will be evaluated on the basis of their climate impact, impact on natural resources, cost impact, implementation schedule and feasibility, security of supply and capacity. The City of Helsinki has committed to openly sharing the lessons and results of the competition to allow other cities to use them in their own climate work.

Proposals submitted in the first phase of the competition included also a large variety of other ideas and concepts that did not reach the finals but which the City of Helsinki intends to highlight during the competition process too.

Climate change is the biggest challenge of our time, and cities have a decisive role in mitigating it. Despite the COVID-19 pandemic, the City of Helsinki keeps investing heavily in its climate work. The climate crisis has not been cancelled and the City of Helsinki is working its way towards a carbon neutral Helsinki by 2035.

At the moment, more than half of Helsinki’s direct carbon dioxide emissions originate from heating the city. This is why finding a sustainable heating solution will have a critical impact on achieving the City’s carbon neutrality goal. Currently, more than half of Helsinki’s heating energy is produced with coal, the use of which will have to stop by 2029. Helsinki wants to find long-term sustainable solutions, which is why it does not want to replace the use of coal with biomass-fired production.

Helsinki wants to find long-term sustainable solutions to heat the city in the future and to act as a platform for new and innovative solutions that also other cities around the world can benefit from.

For this purpose, it opened the international Helsinki Energy Challenge competition on 27 February 2020. The competition seeks solutions through which the city can be heated sustainably in the coming decades without coal and with as little biomass as possible. The competition’s first prize is one million euros.