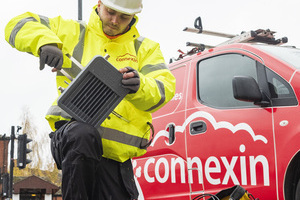 Internet of Things (IoT) and smart city operator, Connexin is to expand LoRaWAN connectivity across the UK to support the development of national smart networks, claims to be first of its kind.

Connexin has announced that it will expand its IoT network nationwide, providing carrier-grade roaming, long-range wide area networks (LoRaWAN®) connectivity and infrastructure to customers all over the United Kingdom.

The new national low cost wide-area network rollout lead by Connexin is a strategic investment aimed at supporting the increasing demand for smart networks throughout the UK. The universal connectivity will lower the barriers to entry and better enable every type of organisation across the UK to adopt IoT solutions to provide further insights that will address future challenges, promote a better quality of life and create environmental improvements for all.

“With a low cost wide-area networking solution becoming available to all organisations across the UK, it opens up opportunities for those looking to deploy IoT solutions for a fraction of the cost of existing cellular infrastructure solutions,” says Furqan Alamgir, founder & CEO of Connexin.

“Not only does this promote the development of new IoT-based technology but it allows existing solutions to be rolled-out nationwide to encourage further adoption and will allow more people to utilise and benefit from affordable, carrier-grade IoT connectivity.”

Following award winning regional deployments, Connexin has raised UK£80 million (in funding in September to become the provider in smart infrastructure and end-to-end IoT deployment in the UK. Connexin currently has regional LoRaWAN networks in place in East and South Yorkshire following deployments in Sheffield with Amey and Yorkshire Water, Hull with Hull City Council and the South Coast with Icosa Water.

The expansion of the national IoT network to cover other areas of the UK is now underway, further cementing Connexin’s position as the provider of densely populated low powered metropolitan networks and demonstrating the importance of having carrier-grade IoT infrastructure nationwide to support new technologies and innovation across UK industry.

“Connexin is committed to changing the status quo in a previously stagnant smart city and IoT market. This announcement builds on our successes to date and will make available high quality LPWAN infrastructure to all,” says Alamgir. “Regionally, we have seen our network used by a variety of sectors and individuals from entrepreneurs and innovation centres to the utility, private and public sectors and have seen continued success with the likes of Amey in Sheffield and Yorkshire Water.

These results have demonstrated the effectiveness of low powered networks across multiple use cases and we’re excited to be providing carrier-grade networks now across the entire UK.”

Donna Moore, CEO and chairwoman of the LoRa Alliance® adds, “I would like to congratulate Connexin on the milestone of rolling out a nationwide LoRaWAN network in the UK, as a result of numerous successful projects and use case demonstrations.

This is a significant achievement for IoT in the UK that will open up tremendous business opportunity and deliver new service offerings that will improve the lives of customers in this market. As the leading IoT network technology, LoRaWAN has the most networks deployed and is the global de facto LPWAN standard. Connexin’s growth is a great example of how LoRaWAN users are able to achieve business success.”