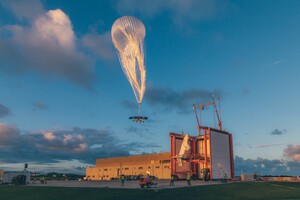 A Loon balloon takes off

(A Week in IoT) – When the news came on Friday that Loon’s journey is coming to an end it was a disappointment if, like me, you’re an admirer of flights of scientific and engineering ambition that combine business opportunity and social benefit. To be fair though, the news did not come as a shock, says editorial director, Jeremy Cowan.

In his blog, Alastair Westgarth, CEO of Loon says, “We talk a lot about connecting the next billion users, but the reality is Loon has been chasing the hardest problem of all in connectivity the last billion users, The communities in areas too difficult or remote to reach, or the areas where delivering service with existing technologies is just too expensive for everyday people.

While we’ve found a number of willing partners along the way, we haven’t found a way to get the costs low enough to build a long-term, sustainable business. Developing radical new technology is inherently risky, but that doesn’t make breaking this news any easier. Today, I’m sad to share that Loon will be winding down.”

Maybe, like us, you had hoped for the best but feared the worst in this bold and imaginative Google-owned project to bring internet connectivity to the world’s poorest-served regions. The goal was to launch a series of balloons into the stratosphere in a ‘system’ that handed over connections from one balloon to the next as they passed over a stationary recipient.

From early trials in Nevada, USA in 2013 to a pilot commercial project in Kenya in 2020 for Telkom Kenya the Loon project was pushed farther and higher by Google’s parent Alphabet as part of its Other Bets division. In August 2019 balloon HBAL703 landed after three months aloft providing a test service over Peru. Later that year the flight system moved south, from where it was launched into a global orbit lasting an astonishing 312 days.

These were not just experimental operations. Loon helped to restore mobile phone connections in Puerto Rico after Hurricane Maria and its work in South America gave thousands of Peruvians a 4G phone service following heavy flooding. On the other hand, Loon flights were said by Westgarth to be responsible for a “non-trivial” amount of UFO sightings.

In July 2020, Telkom Kenya began a trial of the world’s first balloon-powered internet connections. The project used 35 balloons to enable a 4G LTE service. During the trial Loon achieved a downlink speed of 18.9Mbps, uplinks at up to 4.74Mbps and latency of 19ms. The service area for the first launch covered 50,000 square kilometres of west and central Kenya, including Nairobi.

So what have we learned from this?

First, the technology exists to do extraordinary things with interconnected balloons, but that the economics of doing so can be harder to control. Loon learned that balloon networks need launch sites with little wind which were seldom within reach of the areas most in need of internet connection.

To enable more balloons to be launched at each attempt, they created a new type of crane that automatically lifted the vulnerable balloon out of its storage bag without human handling, and closed “hangar” doors on three sides of the crane’s rectangular cuboid frame to enable inflation in a controlled environment. Where 16 people were involved in each initial launch, this was cut to four people. Loon learned how to launch at will, rather than at the whim of the weather, enabling a continuous flow of launches ensuring the balloons remained interconnected.

Yet, as we discussed with Sunil Diaz, CTO of Enghouse Networks in November 2020’s Episode 7 of Tech Trends Podcast, despite Alphabet’s financial resilience in 2020, the Other Bets division of the Alphabet business posted an operating loss of more than a billion dollars on a revenue of US$187 million (€153.96 million). It’s not known how much of this is attributable to Loon, but it was clear that without a breakthrough in the Loon business model such a loss was unsustainable. To put that in context, last year Google earned $12.6 billion (€10.37 billion) in operating income on revenues of $46 billion (€37.87 billion).

Sensibly, Loon was not pinning all its financial hopes on earnings from internet connectivity; at an early stage it had identified other revenue streams in high-resolution earth observation, weather prediction and modelling. It partnered to form the High Altitude Platform Station (HAPS) Alliance with the likes of Airbus, AT&T, Intelsat, Nokia and others to explore new business.

In spite of these opportunities, this week a halt was called to such massive spending in pursuit of the vanishingly small chance of payback. Of course, some will say they saw it coming, but in truth the signals have been mixed. Facebook failed in a similar attempt at connecting the unconnected user with a solar-powered drone. Yet, for a time Loon soared, technologically at least. And, as we also discussed in the podcast, Deutsche Telekom (DT) successfully tested an aerial mobile base station in the stratosphere.

The German network operator is working with its partner, the UK-based start-up Stratospheric Platforms and has connected its terrestrial 4G network to a remotely-piloted aircraft flying at an altitude of more than 14,000 metres. This gave the aerial base station a 90 mile-wide footprint. Stratospherics has been planning to take new investments.

As Loon says, “The internet feels ubiquitous, but it’s not, nearly half the world’s population lacks access to basic connectivity. Loon is working to bridge this divide by pioneering high-altitude communications technology that makes it possible to connect more people, places and things worldwide.”

That dream is sadly over, at least for Loon. Big Tech companies like Facebook and Google are usually lauded as the greatest risk-takers, the giant entrepreneurs with the deepest pockets. Yet, on this occasion it seems that the telco, DT may be the last one standin.

On 19th October 2020, Stratospheric Platforms Ltd reported that, “working with Deutsche Telekom AG (DT), its largest shareholder, technology partner and launch customer, (it) is pleased to announce the world’s first successful demonstration of high speed LTE/4G data and voice connectivity via a remotely piloted aircraft operating in the stratosphere and integrated into DT’s live terrestrial network.”

Has the network operator found a solution that eluded the tech giants or is it simply slower to read the economic writing on the wall? Let’s hope it’s the former. Ladies and Gentlemen, place your bets. Or should that be, place your Other Bets?