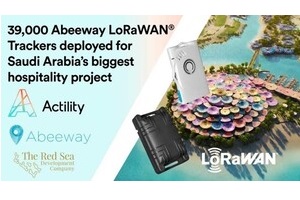 The Red Sea Development Company (TRSDC), the developer behind the ambitious regenerative tourism project, is implementing an extensive IoT safety solution for its construction workforce and fleet of vehicles at its site on the west coast of Saudi Arabia.

The solution is a consortium formed by MachinesTalk, a regional provider in IoT Solutions and Licensed IoT Virtual Network Operator (IoT-VNO) with and Actility, a global provider in IoT connectivity solutions, and smart wearable technology and wireless tagging solutions from Abeeway, an Actility subsidiary specialised in low-power geolocation.

MachinesTalk will deploy and operate a LoRaWAN network to cover more than 3,500 sq.km., and using the nationally developed and hosted IoT Platform “ThingsTalk” to unify and provide location-based insights based on Actility’s ThingPark Wireless IoT platform and Abeeway Smart Badges for up to 36,000 construction workers, and Abeeway Compact Trackers for up to 3,000 vehicles, to ensure safety and security.

The Red Sea Project is a land and property development on the Saudi Arabian Red Sea coast announced by the Saudi Crown Prince Mohammad bin Salman in July 2017. The project is focused on tourism and hopes to contribute to the Kingdoms Vision 2030 strategy by attracting tourists to visit and explore the Saudi western coast.

The giga project is expected to contribute $5.86 billion (€4.87 billion) per year to the Saudi GDP upon completion, at which point it will cover 28,000 km2 (11,000 sq mi) of pristine islands, sweeping desert dunes, mountain ranges and volcanoes. The first phase will complete by 2023 when 3,000 hotel rooms will be constructed along with an international airport, marina and recreation centres. The number of visitors will be capped at one million people every year in line with environmental commitments.

TRSDC aims to become a world leader in environmental sustainability across planning, construction and operations. The project is planned in a way that considers the natural ecosystem of the area and several policies have been developed in this regard including; no waste-to-landfill, no discharges to the sea, no use of single use plastic, achieving a 100% carbon neutrality. In fact, the project master plan predicts a 30% net conservation benefit by 2040, which will be achieved by enhancing key habitats such as corals, mangroves, seagrasses and land vegetation.

LoRaWAN® is particularly interesting in line with the projects sustainability goals as it can serve a multitude of IoT use cases, not only during construction, but also once the project is finished. The same network infrastructure can be utilised to monitor and optimise waste management, parking, lighting, power and water utilities, remote asset monitoring, to monitor the environment and much more.

“We asked ourselves how we could enhance security on our site and enable an efficient construction process at the same time, while considering upwards of 36,000 workers across 3,500 km2, How could we ensure worker safety in case of health emergencies or prevent workers getting lost in remote locations in the desert or on islands? How could we control access and track the 3,000 vehicles of multiple contractors across the construction site, delivering materials, tools and transporting employees?” says Ian Williamson, TRSDC’s chief projects delivery officer.

The IoT solution and the innovation behind

Abeeway smart badges and tracking devices allow TRSDC to identify workers and vehicles and secure the construction area against unauthorised individual and vehicle access. Individual access rights will be granted based on role, responsibility, category and group of workers. In addition, the possibility of identifying vehicles remotely, geo-fencing perimetres and setting up alerts based on worker and vehicle access breaches will further enhance security.

A panic button will enable workers in distress to send an SOS signal back to TRSDC’s security and emergency response centre, allowing response teams to be sent directly to the location of the worker without losing potentially life-saving time. In fact, TRSDC recently opened their Central Medical Facility which will provide the highest medical care quality and assistance for those living and working on site during the construction phase.

From a process efficiency perspective, all tagged vehicles will have an estimated time of arrival (ETA) to ensure that there are no delays between required tasks. In addition, alerts will be triggered for idle workers or vehicles to enable improved worker supervision.

The technology will apply to all TRSDC’s contractors, who will be able to register their workers and vehicles and receive accreditation for them as required. Real-time and map-based remote tracking of workers and vehicles with heatmaps and counts will allow for more effective resource allocation across locations within TRSDC’s construction area.

Given the criticality of the solution and the ranging temperatures experienced on-site, the Smart Badge and tag’s operability will be actively monitored with exchanges of devices with low battery and remote deactivation in cases of loss or misappropriation.

LoRaWAN® is widely used wireless protocol that allows battery-operated devices to communicate with IoT applications via long-range, wireless connections, allowing longer battery life, thus lowering the cost of device ownership. LoRaWAN® is especially useful in large-scale deployments because of its availability, cost, and reach, due to its use of unlicensed spectrum, the availability of standardised, low-cost modules with long battery life.

Machinestalk, is leveraging the Kingdom-wide IoT experience, tailoring the End-End service using ThingsTalk Platform, Application Enablement Platform (AEP), connecting Workforce and Vehicles over the provided LoRaWAN Infrastructure. MachinesTalk licensed as IoT-Virtual Network Operator (IoT-VNO and playing a role to enhance and enable IoT ecosystem in the Kingdom of Saudi Arabia. MachinesTalk provides full-fledged solutions in partnership with IoT players, at the same time it caters to IoT needs with its own platforms and solutions.

“Implementing IoT solutions on this scale with an ambitious timeline requires partners with a proven track record in largescale project delivery, as demonstrated by Actility & MachinesTalk. Their advanced IoT platform and innovative location technology are helping us to meet and exceed the highest international standards for health, safety and sustainability. This partnership will play an important role in ensuring the welfare of our workers, given their experience in providing smart construction technology and alignment with our business goals,” says John Pagano, CEO of The Red Sea Development Company.

“We are very excited to be part of this ambitious and visionary project, which represents our first largescale LoRaWAN deployment in Saudi Arabia in partnership with MachinesTalk, and one of the biggest to date in the world. With a large-scale implementation of our cutting-edge IoT solutions, The Red Sea Development Company now will be able to keep the workforce safer and support secure and more efficient operations, clearly setting a new standard globally,” says Olivier Hersent, CEO at Actility.

“We are very glad to lead one of the biggest & prime projects using LoRaWAN in the Kingdom of Saudi Arabia. We are thinking it’s only a kickstart to long-term Public-private partnership toward smart cities, aims to monetise the provided infrastructure with IoT use cases to scale city operations and uplift people experience.

We believe LoRa is the most suitable connectivity method for this project and we are eager to build the first LoRaWAN network in the Kingdom of Saudi Arabia in addition to upholding all the challenges that will lead us to success. Also, we hope it is the start point and we could cover network throughout the Kingdom of Saudi Arabia by aligning with CITC and enhance the adoption of IoT and capture more use cases that focusing Sustainability & Wellbeing,” says Nawaaf AlShalani, CEO of MachinesTalk.