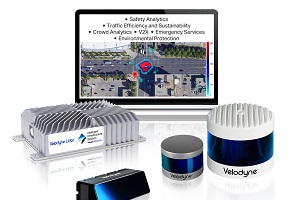 The Intelligent Infrastructure Solution is available now exclusively from Velodyne. It is already deployed in multiple North America cities, including in Quebec and British Columbia, with upcoming installations in New Jersey and more deployments expected across the United States.

The project will serve as a testbed for mobility data-gathering, analysis and sharing technologies that will help implement connected and autonomous vehicle systems in the future. CAIT selected the Velodyne solution after a rigorous vetting process, in which they tested other sensor solutions and competitive lidar systems.

“The acquisition and analysis of mobility data is crucial to integrating autonomous vehicles, and creating a safer pedestrian and cycling environment,” says Dr. Ali Maher, professor and director, Rutgers Center for Advanced Infrastructure and Transportation.

“Velodyne’s Intelligent Infrastructure Solution captures data on various traffic activity including vehicles, pedestrians and bicyclists in all types of environmental conditions. We envision the solution as playing a critical role in helping us create a safer environment for all road users.”

“There is a growing commitment by governments worldwide to rebuild outdated transportation infrastructure systems. Leading the way is the 2.25 trillion-dollar proposal by the Biden Administration to invest in the modernisation of vehicles, roads and transit systems. As Velodyne looks at a world with connected and autonomous vehicles, we know that infrastructure will play a critical role in moving this industry forward,” says Anand Gopalan, chief executive officer, Velodyne Lidar.

“Our solution, powered by Bluecity’s AI-powered traffic monitoring software platform, will be key in the efforts to transform our roads and transportation infrastructure into smart cities, paving the way for a more sustainable, safer future.”

The solution works with Velodyne’s Alpha Prime,Ultra Puck, Puck and Velarray sensors. Velodyne’s lidar sensors do not identify individuals’ facial characteristics, a growing concern for civic applications. Lidar has an advantage in privacy over camera-only systems because lidar does not record details like hair and skin color.

“The initiative showed how this lidar-based solution can track near-misses of accidents at problematic intersections. By using the solution’s data, municipalities can do the critical work of improving roadway safety in a cost-effective and efficient way.”

“We are excited to partner with Velodyne in order to bring to market this breakthrough solution that collects and analyses detailed traffic data about road users while preserving anonymity and trust,” says Asad Lesani, CEO at Bluecity. “We believe that Velodyne sensors are best-in-class and this solution will be a game changer for the smart city industry.”

Velodyne Lidar’s Intelligent Infrastructure Solution can be used for: