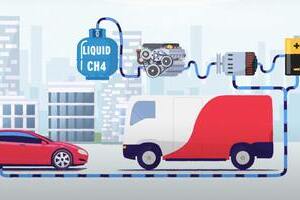 Nowadays it is obvious that current energy needs of Europe cannot be satisfied by fossil fuels only due to the strict environmental limitations threatening to be imposed as early as 2025.

As Dmitry Lashin, CEO, L-Charge says, the regions have yet to establish these strict regulations but they are on their way there. In such circumstances, electrification of vehicles is recognised as a feasible option towards an ecofriendly coverage of those challenges and needs the global economy facing at the moment.

It seems today electric cars have come much closer to the mainstream. The market is being pushed ahead by electric car buyers and a wide array of new models from established car firms such as Toyota and Chevy. Tesla’s focus on luxury, high-performance vehicles has also broadened their appeal as it made electric cars not purely an environmental statement, but a tech status symbol too. Recently tech giants like Apple and Xiaomi have also announced their intention to develop their own electric car models.

Overall, according to the statistics provided by International Energy Agency (IEA), in 2018 the stock of electric vehicles (EVs) in the world showed a 70% growth compared to the previous year and exceeded 5.1 million cars. Although the total amount of EV in the world still remains relatively limited, these figures may be regarded as more than optimistic for those who are eco aware. However, the situation is a bit more complicated.

More than 40% of total electricity generated worldwide comes from burning coal, IEA says. It is especially true for China, where coal generated 72% of all power in 2014, and the USA, which gets about a third of its electricity from coal-fired power. Furthermore, the share of coal in the global energy supply has remained stable for the last 20 years. China may become an EV leader, but those vehicles won’t be doing any good for the environment until it weans itself off his heavy dependence on coal-fired generation.

We should remember that cars are only as clean as their power supply. So experts argue whether electric cars are better for the environment than gas guzzlers once the manufacturing process and batteries are taken into account.

In 2020, the volume of renewable energy capacities in the EU increased by 10% and at the end of the year amounted to 38% of the total energy generation. At the same time, the share of generation from renewable energy sources in Germany exceeded 50%. The share of energy from coal combustion also decreased, which was facilitated simultaneously by the rise in the cost of CO2 certificates and the decrease in gas prices.

In recent years, the capacities of batteries for storing electricity have significantly increased, the efficiency of power generation on renewable energy sources has increased, and the cost of commissioning new capacities has decreased. All this contributes to an active transition to green energy in developed countries: in 2020, 90% of all new capacities introduced in the world fell on renewable energy sources. According to the forecasts the IEA, by 2030 80% of the EU’s electricity can be obtained without using fossil fuels, while renewable energy will account for up to 60%. But that may sound a bit too optimistic.

Since the production of energy from renewable energy sources is intermittent, it is necessary to build disproportionately more transmission lines for them, since the system must be able to transfer maximum power in the available periods of time, and not average, as is the case in poer plants using traditional fuels.

Renewable electricitwy does not have the same controls over aspects of the grid (current capacity, amplitude) as a fossil fuel power plant. In this regard, additional elements must also be introduced, which will require new costs.

Considering the fact that the location of RES is dictated by the requirements of the climatic and geographical location, they can often be located very far from the end consumer, and the question arises of the accumulation of RES energy, its storage and further transportation. The EU intends to abandon ICE transport by 2040; they plan to transfer part of the energy system to hydrogen. But is hydrogen really an answer from today’s perspective?

Neither today, nor in the coming decades, Europe will be able to abandon the use of natural gas. Due to the extremely cold winter this year, European consumers have only increased their purchases of Russian gas. Renewable energy sources do not yet cope with the task in unfavourable weather conditions to consistently supply the required amount of energy. The problem can be solved with an increase in capacity, service life of storage elements, as well as when they become cheaper. According to UBS forecasts, energy storage costs should decrease by 60% -80% in the next 10 years.

As for the transition to hydrogen, the gas industry has strategic advantages. At the moment, obtaining hydrogen by electrolysis is an expensive and economically inexpedient process. Of course, this issue will be resolved in the future, but until then, the most efficient way to produce hydrogen is to reform hydrogen from natural gas. Investing in making hydrogen available and affordable is very important, but we still should rely on LNG in order to bridge the gap between diesel and zero-carbon hydrogen fuels.

Natural gas, and hence LNG, is very suitable for reciprocating engines and as such offers a cleaner alternative to fuel oil and diesel. Electric vehicles market could also benefit from LNG as a fuel for power generation. The good news is that the infrastructure that we are building with LNG-powered EV chargers could be later transformed into hybrid use or hydrogen-powered without much extra investments.

With the rapid expansion of the LNG infrastructure in Europe, LNG based electric chargers for vehicles could become the next step. Whereas, solutions based on natural gas have traditionally been limited to areas covered by the natural gas grid, LNG helps opening up new off-grid markets. Using LNG allows it to provide a virtual natural gas grid connection. In Spain, Belgium, Ireland and France, numerous LNG gas and power stations are operational today, but still haven’t been considered as a source of energy for electric vehicles.

LNG can offer a cost competitive and comprehensive solution for existing gas, or better say charging stations. Surely there are initiatives like those by Total in Belgium and Shell in Norway, where those take care of the entire LNG supply chain including sourcing and loading at the LNG import terminal, transport by road, rail and sea, on site storage, re-gasification and delivery at the flange to the gas stations. But regarding the vehicles it only offers to load heavy trucks working on LNG as a fuel.

Now, imagine the small-size generator, which could reform LNG into electric power at any given place. That is not something fantastic, all these technologies are available today and, unlike hydrogen are already cost efficient. It has been broadly used at greenhouse facilities around the globe for a while.

Choosing LNG for power production against hydrogen would offer significant efficiency gains in a short to midterm period. LNG based gas to power electric vehicle chargers could result in overall fuel efficiency use increases to as much as 75-80%.

LNG, as the cleanest fossil fuel can help facilities that do not have access to pipeline gas to meet new emission regulations. It is also important that the use of natural gas-fired is actively promoted by European, national and local governments through investment grants and guaranteed feed-in tariffs.

The thing is that this could allow us to accelerate the transition to electric vehicles as well as clean energy today. Such services like L-Charge, for instance, are already under run. But in order to make this transition happen there should be a political willpower form both the government and corporate leaders.