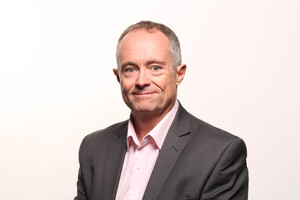 Simon Wilson is chief technology officer for Aruba UK & Ireland , a Hewlett Packard Enterprise Company. In this role, he works as a brand ambassador articulating the Aruba vision for experience-driven infrastructure.

Simon also works closely with Aruba customers and partners across all markets to design smart and secure workspaces that maximise business productivity.

Here, he shares some of the Life Lessons he has learned from a successful career working across multiple disciplines in product management, marketing, and channel operations roles. His experience also includes network design and electronic engineering.

Simon Wilson: My computer studies teacher would say I was ‘bitten by the micro big’ early on, so I guess working in IT was something of an inevitability. However, my childhood dream was to follow in my grandfather’s footsteps and join the Royal Air Force. Sadly, my eyesight was not good enough to become a pilot, so I investigated becoming an Air Loadmaster. That’s the person you see pushing air-drop supplies out the back of transport aircraft like the Hercules. Not a pilot but still flying.

Simon Wilson: Oh, many, many things. Although that being said, it might just be my background in engineering making me analyse the things I do and figure out ways I could’ve done them better. However, both the business and personal sides of me tries to always move on. If I have to pick one thing – and this is more of a wondering than a lesson – I think it would be to have committed to running my own company.

Back in the 90s, I ran a small IT reseller business but eventually sold out when I got an offer to join Bay Networks. Although I don’t regret my time with Bay, in fact, those years were amongst the best in my career, I do wonder where life would have led me if I’d stuck with my own business.

IoT Now: Without naming and shaming, tell us about your worst ever boss?

Simon Wilson: This one is easy. Some years ago, at a previous company, I was placed in the terrible position of having to lay off some of my staff. My boss at the time demonstrated a lack of leadership, was not supportive at all and thought shouting was the best way to get things done. The whole event was traumatic and affected me for quite a while. While I’ll never forget that boss, he did teach me how not to behave as a leader. I’d like to think I benefitted in the long run.

Simon Wilson: I’d have to say it’s use in home automation. I think it’s a really exciting area that could help people live their lives in a healthier way as well as help us as a society reach our goals for sustainability. The challenge though is that big tech companies need to get it absolutely spot on. Too often there are instances of an exciting start-up being acquired by big tech, only for said ‘big tech’ to change direction and leave early adopter consumers high and dry.

Simon Wilson: I was living in California with my young family and had travelled to Winnipeg in Canada for a conference when 911 happened. Like everyone at the time, we did not know what the full extent of the attack was or would be and we couldn’t get home. I remember being ‘stuck’ in Winnipeg for a week before I could get home to California. Memorable, but not for the right or nice reasons.

Simon Wilson: Keep it simple. Using long words and acronyms isn’t clever if the person you are talking to doesn’t get it. And, if they don’t it’s your fault, not theirs. We all need to listen more and take the time to make sure we understand and are understood. Especially when crossing cultural or language barriers.

Also, as a technology industry, we seem obsessed with talking about features when what customers really want to know is what’s the benefit to them. Put yourself in the customer’s shoes. Can you see the benefits, and would you buy it if it was your own money?

Simon Wilson joined HPE in March 2014 with more than 25 years’ experience in the networking industry. Before this, he was with Nortel/Avaya for 16 years where he worked across product management, marketing, and channel operations roles. His experience also spans network design and electronic engineering. Simon led the EMEA product marketing team and worked in Nortel’s Global product marketing organisation in North America. Prior to that, he had worked in the SMB reseller market and in distribution. Simon holds a BTEC in Engineering from Croydon Technical College in the UK.