Home › IoT News › Life Lessons: Have faith in your abilities, and know that it’s ok to take some risks 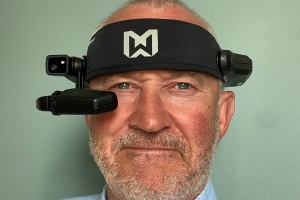 Travelling the world was once the norm for Jon Arnold, VP of sales, EMEA, RealWear, Inc. But working from home has improved productivity, quality of life and perhaps the planet. He couldn’t have said that if he’d become a pilot or a foreign correspondent, as he once hoped.

Jon Arnold: When I was a child, I first wanted to be a pilot. I spent most of my time making Airfix models. Soon after, I wanted to be a doctor, but quickly realised that I didn’t like the sight of blood. As a teenager, I decided that I’d like to be a foreign correspondent, which seemed to be a hugely glamorous, exciting profession. I did a degree in Modern History and started to learn Russian but soon realised that I didn’t have the knack for languages and was not a natural writer. Also, my idealism was rapidly tempered by the lure of a company car.

After graduating, I worked for a company called Ideal Standard which, much to the mirth of my friends, made Sanitary Ware. I endured lots of jokes about being flush with money, working in long chains of command and being driven around the bend. However, later in life, after working for several IT companies, I realised the value of an early role in a highly competitive, manufacturing company that, still to this day, was one of the best marketing organisations I have ever worked for.

Jon Arnold: To have a little more faith in my ability to get where I wanted to be. People are mostly successful for three reasons: desire, ability and luck. If you possess two of those qualities, you can make it in life; having all three just speeds things up a bit. I would also counsel my younger self to take some risk, as I did when I joined the first of seven start-ups. It was hard work, but every day was exciting. The learning process in small companies is just incredible and you are empowered to make decisions quickly.

Jon Arnold: I was given the chance to work for the CEO of a company who was actually a well-known special forces leader. I thought that this would be an interesting experience, and it was; but not for the reasons I had expected. To my surprise, the company was the most centralised, stiflingly risk averse, process-led organisation I had ever worked for. Ultimately, the organisation never met its potential because of this culture. That said, I have also worked for some wonderful people. I remember a CEO who had the best attributes of being talented, humble, decent, hardworking and hugely motivational.

Jon Arnold: I may have to be a little parochial here! Using RealWear’s assisted reality wearable solution for the remote support of IoT-enabled critical machinery and infrastructure enables a local engineer in an extremely austere and perhaps hazardous environment (in the rain, up high or at sea) to send IoT data to an expert in real time across the other side of the world. That remote expert can then see the problem through the eyes of the worker, help diagnose the issue, and help the local engineer safely make the fix in real-time, with zero travel or delays and tremendous cost savings to the site. This is something to behold.

Jon Arnold: For many years I travelled for business extensively, often taking up to 80 flights a year with 4:00am starts and 20 hours per week of travel just to get to a customer; therefore, airports and flights began to merge into one another. Perhaps my most memorable travel experience is the last 15 months where I have made exactly zero flights, one train journey and four car trips. During this period, our business levels have grown 400% and my team of 12 is now 14. But whilst it is genuinely nice to meet people in the flesh, we have permanently changed our ways of working with positive effects on productivity, the environment, costs and quality of life.

Jon Arnold: Doing business in other countries has been a real blessing, as has experiencing different cultures. Everywhere I have travelled to has reinforced the notion of being open and adaptable. For instance, there is an indescribable difference in doing business in the Middle East to Sweden. Even the business culture from Denmark to Sweden is nuanced! I manage a team of incredibly bright and able people across Europe, Russia and the Middle East and have a head office in the US. The interplay of ideas and the pleasure of good people’s company, albeit virtually these days, is extremely rewarding.