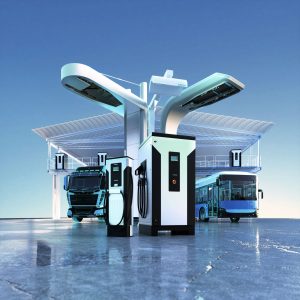 As the number of electric vehicles increases, e.g., in commercial fleets or public transport, overnight charging infrastructure for hundreds of vehicles will become a common feature of our cities. Simply putting charging points in place, however, will not suffice. The situation is vastly more complex: Many vehicles enter and leave a typical eMobility depot, e.g., for eBuses, at different times and have varying energy requirements, says Timothy Hughes, product manager for eMobility Software at Siemens Smart Infrastructure.

In addition, the electricity rates usually change according to the time of day; there might be power constraints due to an insufficient grid connection; different types of chargers might have to be considered. The objective is to charge the fleet of vehicles at the right time, with the required energy at the lowest cost. To master this level of complexity, depots need to harness the power of Artificial Intelligence (AI) and the Internet of Things (IoT).

Connect the chargers and apply AI

The first step is to connect the chargers in the depot to a monitoring and control system. Most efficiently this is done by linking the chargers to a cloud-based IoT system, which collects data typically more than twenty parameters, e.g., energy used, voltage or temperature and enables the chargers to be monitored and controlled. Ideally, the connectivity is ensured through an open protocol such as the Open Charge Point Protocol (OCPP) to operate different chargers within the depot if needed.

This first step is the basis for optimising the power and energy usage within the depot. For this purpose, all aspects relevant to efficient charging need to be considered, e.g., vehicle parametres (battery type, maximum charging rate), charging station details (the charger’s maximum power, number of connectors etc.), the specifics of the electricity bill (demand charges, time-of-use rates) and lastly the vehicle schedule (entry and exit times of each vehicle as well as the energy required for the planned route).

Once this information originating from different sources e.g., the depot management system, the depot’s electricity provider etc. has been gathered and prepared the optimisation can begin.

The aim of the optimisation is to manage the combined charging schedules for each vehicle in order to deliver the objective e.g., the lowest possible electricity bill for the depot. With one vehicle this is simple: electricity is typically cheaper after 10 pm, so the solution is to charge the vehicle after that time. With five vehicles it may still be humanly possible to find a feasible combination of charging times, but with several hundred vehicles optimisation will quickly spiral out of (manual) control.

And this is where some clever mathematics and computing power come into play, called AI-driven smart charging, which will search the multitude of possible charging schedules for each charger and vehicle in order to find the solutions that deliver the lowest cost (or other set objectives).

This is achieved by reducing the overall energy or power usage in the depot during expensive time periods. The optimal individual charging schedules for each charging station are then downloaded from the cloud control system using the charging stations’ inbuilt IoT capabilities.

Here’s an example that demonstrates the power of AI and shows how it can help to reduce the operating costs for a large depot of electric vehicles, Imagine a depot that hosts 150 buses, each requiring around 160 kWh of electricity every day.

The depot is modelled with three waves of buses returning to the depot at the end of the day. With uncontrolled charging, each charger starts as soon as it is plugged in and this produces a power profile with two main peaks of 4.6 MW and 3.9 MW at 9 pm and 2 am respectively, and a further smaller peak at around 9 am.

To see what this means for the operational costs of the depot, consider that most commercial customers have two charges on their bill:

In most cities, there is some form of time-of-use tariff – meaning that both the electricity and the demand charges are cheaper at certain times in the day. Evidently, in order to reduce operating costs, the depot should use most of the energy when it is cheapest.

Use case #1: Reduce the electricity costs

To illustrate this, the proposed commercial EV (CEV) rates from the US-based utility PG&E are applied to the depot power profile above. Approximately 11,000 kWh of electricity are consumed at peak rate, 14,000 kWh at off-peak rate and virtually nothing using the super off-peak rate. The daily electricity costs would be almost US$5,000 (€4230.68). To slash costs, the electricity usage needs to be moved from on-peak to off-peak times.

To minimise power costs, the overall power level for the depot is also controlled. The AI algorithms are going to search for an optimum solution that both shifts the energy usage (load shifting) and also reduces the maximum power (load shaving) for the depot effectively a multi-dimensional problem.

The optimal power profile for the same depot, as determined by the AI algorithms, can be seen in Figure 2. It features 150 individual charging schedules (one for each of the 150 vehicles) which, when combined, shift the energy usage out of the expensive time period while also reducing the overall power level.

The result is a new electricity bill of under US$3,000 (€2538.40) per day. This corresponds to savings of around 40% and is achieved without any operative restrictions the schedule is maintained, vehicles still enter and leave the depot at the required times and receive the required energy to fulfil their mission.

Use case #2: Reduce the demand charges

Demand charges are based on the maximum power the customer uses and usually also depend upon the time of day. To reduce these charges there are two levers: Firstly, power peaks need to be reduced and secondly, power needs to be shifted away (load shifting) from the primary demand region (i.e., to after 10 pm). Taking the charges of Con Edison, a New York-based energy company, as an example, there are two charge structures: one for the summer and one for the rest of the year.

The summer charge structure can be seen in the figure below where the depot power profile is also shown (Figure 3). It is obvious that the peaks produced by uncontrolled charging have a strong financial impact with a particularly decisive peak at around 9 to 9.30 pm. It triggers high charges for the primary demand charge period (8 am to 10 pm) and the secondary demand charge period (all hours). The monthly demand charges total almost US$162,000 (€137073.87).

The AI-optimised power profile for the depot (Figure 4) shows a significant reduction of the overall peaks from 4.6 MW to around 2.5 MW. Furthermore, the power usage has shifted away from the primary demand charge region. Together these two improvements can reduce the monthly demand charges by around 50% compared to uncontrolled charging processes. As in the first case this can be achieved without impacting the operations; the vehicles are charged and ready to be deployed when needed.

Managing depot charging is key for the economic and efficient operation of an electrified fleet and can significantly boost decarbonised mobility. With smaller fleets, load management (sometimes referred to as “smart charging”) is a key tool to lower both CAPEX and OPEX. As fleets grow, cutting edge technology such as AI need to be leveraged to manage complexity.

Although exact figures vary from location to location, energy costs can be reduced by up to 40% and demand charges by up to 50%. This scale of savings bolsters the business case and is essential for the long-term success of eMobility.