Home › Blogs › How IoT has enabled the monitoring of bees in Chile: an agritech case study 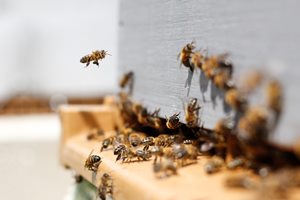 Bees are vital to our planet and our survival. In fact, almost 90% of wild plants, and 75% of global crops need animals to pollinate them which works out to approximately one in every three mouthfuls of our food depending on bees! To add to this, the global market value of honey is predicted to be worth US $11.16 billion (€9.54 billion) by 2027 which is a tasty-looking market for beekeepers around the world!

However, like every industry, honey production is not without its challenges: dwindling bee populations; a rising demand for honey; extreme weather conditions. In this case study, says Aliaksandr Kuushynau, head of Wialon at Gurtam, explore the problems faced by one company in the space, and how it adopted cutting-edge Internet of Things (IoT) and global positioning systems (GPS) tracking technology to protect its bee population.

Chilean-based Colmenares El Refugio is a client of Geotrace SpA, and is actively involved in the production of honey, through the pollination of plants and trees by bees. Up until this point, the inability to check and control the temperature and humidity inside beehives without ruining the microclimate in the hive had already led Colmenares El Refugio to the loss of 50 hives, which at US$4,000 (€3419.02) per beehive, plus a loss of US$11,000 (€9402.30) in future production, was an unwelcome expense not to mention, the devastating loss of the animals’ lives.

In addition to this, every time a hive was struck with a serious disease, the company was forced to eliminate all the affected bee families again, a serious challenge in terms of bee wellbeing. And in terms of theft, the company has also incurred the loss of 100 beehives at a cost of US$23,000 (€19659.36).

These challenges threatened both the bees’ wellbeing and population, and the bottom line of Colmenares El Refugio. The race was on to find a solution…

GPS tracking and IoT platform Wialon provided Colmenares El Refugio with software to address the three specific challenges it had been facing, outlined above.

Colmenares El Refugio’s solution came by way of a partnership; combining Geotrace, which offers a solution called HiveTrace that controls the temperature and humidity inside beehives, with Wialon, which collects the data in its cloud-based monitoring system. By monitoring the parameters of temperature and humidity via sensors embedded within trackers in each hive, bees can be kept healthy at a consistent climate.

The solution also monitors the beehives’ location and any movement. This provides the beekeepers with up-to-date information on where the beehives are, via data, which is recorded every two hours and presented in Wialon’s platform, in the form of maps, charts and graphs.

The project encompassed four key phases. In the first phase, Geotrace collected its customer’s requirements, analysed them, and decided on the best IoT device for the job. Then in the second phase, beekeeping specialists started recording the temperature and humidity values from the installed IoT devices to build a picture of the optimal climate.

The next phase was the testing phase; conducting walkthrough assessments with the NimbeLink asset tracker, to test the connectivity and feedback. And the final phase, and stage of the project, featured tests in functional beehives in order to examine the data reception within Wialon.

Unlike other IoT-based projects especially those in the agriculture industry all parties had to deal with the uncommon condition that Geotrace had to be non-invasive and have as minimal interference as possible into the life of the beehive and its daily pollination and honey-making operation. As a result of this condition, specialists had to define the best hours to complete the installations, as well as the best time weather-wise, for the bees. The challenge of finding the optimal place to install the device on each beehive also had to be addressed, sensitively, with the bees in mind.

Buzzing with the result

By implementing IoT and GPS tracking to help monitor the location and enhance the well-being of the beehives and their inhabitants, Colmenares El Refugio has reported no thefts, increased cost savings, and improved welfare of the bees through the prevention of bee-related epidemics.

Looking to the future, Colmenares El Refugio is planning an upgrade to the solution which will enable beekeepers to also count their bees. This data will provide the beekeepers with an understanding on the health of the hive, as well as improving pollination and optimisation around honey making.

Colmenares El Refugio also plans to use weight sensors, which will help its beekeepers to know if the amount of honey produced is optimal, or whether there is a problem, and something needs to be changed. The Wialon-based development for online monitoring, generating reports, statistics, graphs is also on the way.

The agricultural industry remains a key forerunner in the use of IoT and GPS tracking technology in terms of improving automation, driving efficiencies, and improving yields. The use of IoT devices and GPS tracking in this particular case study is just one of many examples of how one of the world’s oldest industries can benefit, and it is exciting to see what the future holds as this technology continues to be adopted around the globe!

The author is Aliaksandr Kuushynau, head of Wialon at Gurtam.