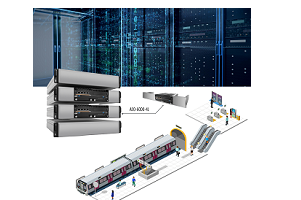 These sophisticated traffic management systems keep rail cars a safe distance from one another, allow time for sufficient braking, and control rail operations that determine the position and safe path of trains. One railway leader recognised that smart upgrades to its railway signaling infrastructure could add next-gen performance to its other data-centric applications, such as real-time surveillance.

This railway provider had initially developed its own upgraded railway signaling system as a 2U 19-inch rackmount system designed for train-borne installation. Sourcing every component and certifying the system had taken 18 to 24 months further performance upgrades needed to be handled much more efficiently.

A building block approach would reduce design timelines and resources, quickly resulting in solutions that are standard, vetted and certified. Once its own final specifications were considered and integrated, the firm’s compute provider delivered a testable product within 30 days. The system was quickly and easily connected with the rolling stock’s block architecture network, allowing for rapid deployment with minimum downtime.

The backbone of this solution is an industrial grade computing system that is tested, pre-certified, and EN-50155/50121-3-2/EN50121-4 standards compliant. The railway firm’s compute provider also took on risk assessment and performance validation to ensure compliance with IS402, a safety regulation administered by the European Union Agency for Railways. The system’s modular design allowed tuning of its 4LAN port daughterboard module, meeting HIPOT certification based on factors such as surge assessment, dielectric withstand, and insulation and pulse resistance.

Supported by 6th and 7th Gen Intel Core processors, the solution delivers sophisticated CPU performance, power efficiency, and heightened connectivity for edge-to-cloud computing. Data workloads, now decentralised away from the cloud, are processed immediately, in real-time near their source an approach that is optimal for railway signaling operations and their mission-critical nature.

A significant differentiator is the system’s scalable support up to 16 PoE devices allow for strategic positioning of surveillance devices, helping optimise potentially limited power resources. Multiple cabins, with up to 16 cameras each, operate as a real-time surveillance network throughout the rolling stock environment. Data security is also a design priority the system utilises a trusted platform module (TPM) to secure data at the hardware level, protect against malware, and encrypt data to be compliant with privacy controls like the General Data Protection Regulation (GDPR).

Rugged-edge devices are advancing real-time decision making through advanced analysis, facial recognition, and object detection, improving service and safety in railway applications. Since June 2019, this railway leader has deployed this system more than 300 times, tapping into an intelligent building block design for competitive value and to get to market quickly. Rugged solutions for railway signaling and NVRs are movement towards instant insight by efficiently utilising extreme data processing close to its source no matter the environment.

The author is Dustin Seetoo, director of product marketing at Premio, Inc.