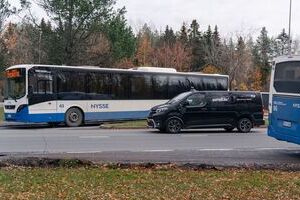 A new self-driving shuttle bus pilot offering the last mile service in Tampere, Finland will examine how autonomous vehicles could be utilised as a part of public transportation in the area. Two autonomous Toyota Proace mini-buses, automated by Finnish self-driving technology company Sensible 4, will work as feeder traffic for the first tramline in the city.

“The upcoming pilot in Tampere is an excellent real-life example of a transportation service that will eventually improve people’s lives in the suburban areas, decrease the need for privately owned cars, and help with the lack of professional drivers. We’re also developing on-demand transportation functionality to further advance the service”, comments Jussi Suomela, CBO, and co-founder of Sensible 4 about the route and role of autonomous shuttle bus service to the cities.

He continues, “We see shared, electric and driverless mobility as a huge improvement in sustainability of transportation. It’s really making an impact on our cities.”

Tampere is one of the biggest cities in Finland and it is the most populous inland city in the Nordic countries. Hervanta suburb in Tampere is known as a university campus area, and a science hub – it’s also known for its development towards a smart city. The testbed in Hervanta enables the testing of urban transport with automated vehicles in a genuine suburban environment. Also, a digital twin of the test area has been made to enable the planning of new transportation services.

“Hervanta testing area is a serving testbed where science communities, manufacturing industry, city, and companies develop smart transportation solutions together. We would like to implement similar activities as this autonomous driving pilot also in the future”, comments Markku Niemi, senior business advisor of the Connectivity Ecosystem of Business Tampere, the Tampere region economic development agency.

The route is around 3,5 kilometres long. It runs clockwise with 10 bus stops and interesting detail is driving part of the way on tram lines. This pilot supports the development and launch of Dawn, Sensible 4’s all-weather full-stack autonomous driving software, which will be released later next year.

Tampere last-mile trial in a nutshell

It’s getting busier in the autonomous driving industry again

The autonomous driving industry is getting more active as the countries recover and are opening up after the COVID-19 pandemic, and Sensible 4 is no exception. The company has been expanding its deployments abroad with self-driving pilots in Germany and Switzerland, in addition to services running in the Oslo area in Norway. Operations will expand more with upcoming new pilots in Japan, again in Switzerland, and above the arctic circle in Norway.

“As countries are opening again and people are getting back to more normal routines, there is a growing need for public transportation. We want people to be able to move in a sustainable way”, says Suomela.

The Tampere pilot is part of the EU-funded SHOW Project. The project has received funding from the European Union’s Horizon 2020 research and innovation program under grant agreement No 875530.