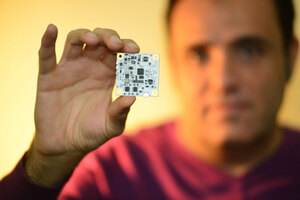 The concept may still sound futuristic to some, but wireless power is already changing the world today, with endless applications powering consumer and industrial devices and the wireless power industry poised to grow exponentially. It’s going to have a significant impact on virtually every sector as wireless power finally allows the IoT to live up to its full promise.

Wireless transmitters can deliver power safely to receivers embedded in just about any device, sending power in a way similar to how Wi-Fi sends data. Devices like IoT sensors, temporary trackers, smartphones, gaming controllers, smartwatches and much more can be outfitted with receivers that send a signal to a transmitter to safely receive power at a distance, even while in motion, says Hatem Zeine, founder, president and CTO of Ossia.

One reason to be optimistic about the prospect of seeing wireless power’s transformative effects in the near future is the progress the sector has made on the regulatory front. As a result, there are multiple wireless power applications that are already improving efficiency, safety and convenience.

Wireless power technology that delivers power over the air, at a distance and without need for line of sight has cleared key regulatory hurdles, paving the way for widespread consumer and industrial applications. In the U.S., the FCC issued multiple certifications for a patented technology that delivers wireless power safely and effectively which signals an important new phase.

This forward momentum on the regulatory front has enabled the wireless power sector to start offering new options to businesses. One example is a wirelessly powered truck trailer tracker system that is helping the largest retailer in the world save money and improve safety. The technology proved its ability to save money and improve safety at a busy distribution centre.

For example, at large distribution centres, lost truck trailers are a persistent and costly issue, which often maintain multiple-acre yards where nearly identical trailers are parked while awaiting loading dock access or transit elsewhere. Temporary GPS trackers that are powered by conventional means, such as hundreds of charging cables, are an unreliable solution to track truck trailers because the batteries run down.

Distribution centre lots lack the staff and wired infrastructure to keep up with manually recharging the devices. So, when they lose track of trailers, workers have to go out and locate them on foot or in vehicles, elevating safety risks in busy yards and incurring additional labour costs. Sensata Xirgo licensed a wireless power technology to solve this business problem.

In the program, the distribution centre deployed hundreds of GPS trackers that power up in a wireless charging enclosure. Yard personnel deploy the trackers on incoming trailers and place them back in the charging station when trailers leave the yard. The trackers “sleep” while motionless and “wake” when the trailer moves, conserving power. During the pilot program, yard personnel accurately located trailers 100% of the time, saving thousands in labour costs.

The distribution centre calculated that it could save at least 1,400 hours annually by using the wirelessly powered trackers. Large distribution centres could potentially save hundreds of thousands per year, just by making sure trailers were accurately located and eliminating incidents where the wrong trailer is attached to a truck and then has to be re-parked.

Truck trailer trackers are just one example of how wireless power is applied today. There are endless applications across transportation and logistics, retail and just about any business or consumer use case. A sensor capable of tracking a pallet or shipping container’s location over long distances without human intervention would be a gamechanger in the global supply chain.

Sensors could not only track location, but they could also provide information about the conditions (temperature and humidity, for example) and handling, e.g., if items were dropped. This could revolutionise the distribution of perishable and/or fragile items. Sensors could alert warehouse or retail personnel when conditions change and items need to be moved, without the electrical infrastructure required for wired sensors.

How wireless power will transform healthcare

Wireless power can also transform healthcare, freeing patients from the wires currently needed to power many devices that gather critical health data and alert care providers when there is a change in vital signs. Using wirelessly powered devices can improve patient compliance by eliminating bulky batteries and allowing patients to wear devices anywhere.

In a healthcare application, wireless power that enables delivery of real-time data can allow care teams and/or hospital systems to analyse information instantly instead of downloading and assessing data periodically. Care providers could also set up a system of alerts, automating messages to patients, staff, family members and first responders when there’s a change in vital signs that requires immediate action.

Wireless power has the potential to remove one worry consumers have that their phones will die. A phone case with wireless charging capabilities can keep batteries topped off. But that’s just the beginning. Soon, consumers will be able to power their smart home and personal gadgets with wirelessly delivered power, including indoor wireless cameras, air quality and temperature display devices, smart trackers that recharge automatically at home and smartwatches users can wear day or night without taking them off to charge, enabling people to gather data on sleep habits as well as fitness activities.

Gaming is another potential consumer application for wireless power. Game controllers that can be powered up without wires and heavy batteries can allow game developers to focus on enhancing connectivity and adapting to player movements. There are nearly 3 billion gamers currently, and the number is growing, so it’s a huge market that will be receptive to wireless power-driven innovation.

Drone technology can also benefit from wireless power, whether the drone is used by hobbyists at home who want to keep their drones powered up while in flight or used in a commercial setting, such as a warehouse. Heavy onboard batteries affect drone miniaturisation capabilities, but wireless power can potentially solve that problem.

Wireless power has come a long way in a short time, but as we approach 2022, the industry is set to grow like never before. Look for wireless power to unleash the full potential of the IoT in the months ahead and inspire new innovation across business, healthcare and consumer product development.

The author is Hatem Zeine, founder, president and CTO of Ossia.