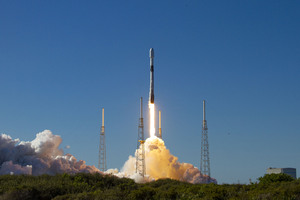 Vilnius, Lithuania, 20 January 2022 – NanoAvionics, a smallsat manufacturer and mission integrator, confirmed the reception of signals and healthy telemetry data from all of the three satellites launched into low Earth orbit via the successful SpaceX Transporter-3 mission.

The rideshare mission that went into orbit on 13 January 2022 included one of the large and heavy CubeSats. The 16U small satellite, is the first of five satellites, contracted to NanoAvionics by British company Sen, to establish video streaming media to provide real-time Ultra-High Definition (UHD) videos of Earth.

“The really interesting thing about video as a type of data is that it has a storytelling power,” says Charles Black, CEO of Sen, during a livestream event of the SpaceX launch by NanoAvionics. “We want to empower people to witness the evolution of life on Earth (and eventually – beyond) and to monitor the health of the planet. We also want to empower them by giving this information directly, in the hope that this will not only enable people to take action but also inspire global change about the way we look after the planet.

“It’s been fantastic to work with NanoAvionics and their engineers. They have taken on all kinds of technical challenges in terms of the avionics and satellite build to accommodate our payload and optimise its performance.”

Also aboard the Falcon-9 rocket was HYPSO-1, a 6U nanosatellite built for the Norwegian University of Science and Technology (NTNU), to conduct ocean research. From its Sun-synchronous orbit, HYPSO-1 (HYPer-spectral Satellite for ocean Observation) will monitor algal blooms and other aspects of ocean health in an autonomous synergy with robotic agents around the Norwegian coast. It is the first of the two satellites NanoAvionics will supply to the programme.

The third NanoAvionics built satellite that went into low Earth orbit (LEO) onboard Transporter-3 is the 3U IoT nanosatellite DEWA-SAT 1. It is part of DEWA’s (Dubai Electricity & Water Authority) Space-D programme and will support the digitalisation of Dubai’s power and water networks. Through an ambitious programme and with the expertise of NanoAvionics, DEWA intends to enhance its flexibility and agility in monitoring and managing its electrical and water networks. Through Space-D, DEWA also expects to reduce costs, improve its asset utilisation and provide sustainable, efficient and reliable power and water services to its customers.

Following the successful SpaceX launch, the third in a series of dedicated rideshare missions for small satellites, NanoAvionics confirmed signal acquisition and healthy telemetry from all of the three satellites.

“This is a fantastic start for us, our customers and all space enthusiasts,” says Vytenis J. Buzas, founder and CEO of NanoAvionics. “While the commercial space sector has seen hundreds of small satellites being launched, there are only a few 16U satellites in orbit. We are very happy to pioneer this form factor and push the capability limits of this satellite’s bus volume in many technical ways. I’m looking forward to watching the first video streams of Sen’s satellite.

“The launch of the three satellites continues a successful 2021 that saw NanoAvionics doubling its revenue, growing our team by more than 50%, and building our first microsatellite bus MP42 for our own commercial rideshare programme.

“We also assembled 16 custom satellites last year and have 27 more in progress. This year, we plan to launch 14 of those, including our first microsat, the MP42 – the industry’s first commercially available modular microsat bus. And we have almost finished all construction works for our brand new MAIT (manufacturing, assembly, integration and test) facility in Vilnius, where we’ll begin operations soon.”