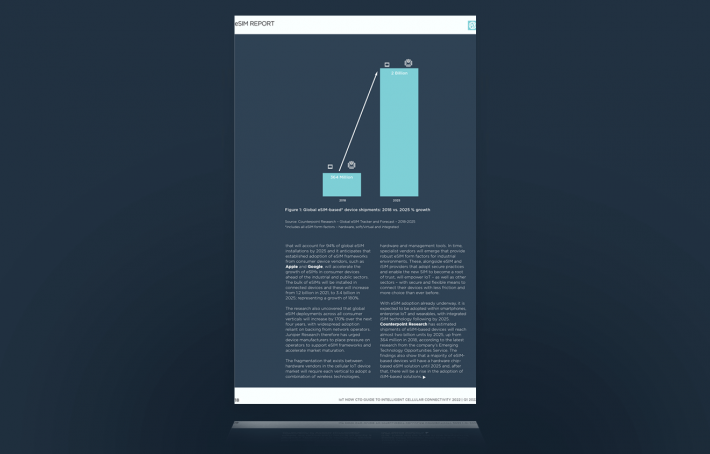 Embedded SIM (eSIM) has emerged as a means to free consumers and connected devices from the constraints of the traditional, plastic subscriber identification module (SIM) card by enabling an eSIM or an integrated SIM (iSIM) to be embedded into a device at the point of manufacture and shipped globally.

On arrival at the location where it will be used, the device simply connects to the most suitable network operator in a process known as bootstrapping and the device is authorised to connect to the network, with the owner paying service charges. That’s the theory at least, reality will involve some fragmentation and the need to select providers and manufacturers that can integrate or embed SIMs into devices, writes George Malim

The promise of this radically simplified process is an advantage for original equipment manufacturers (OEMs) because it enables them to streamline the production process and have just a single stock-keeping unit (SKU) designation for a global product rather than having multiple variants for different global markets. They’ll also be able to play themselves into the connectivity value chain, potentially using their customers and the volumes of devices they make as a springboard to negotiate deals with connectivity providers that they can resell to customers.

User organisations will also benefit because they won’t have to install SIM cards into devices when they arrive at the point of use. In addition, they won’t have to configure simple devices for local markets, saving time and cost.

These organisations won’t have to engage in complex vendor management processes nor have to commit to a single carrier for the life of the deployment. Instead, they will have flexibility to choose the best coverage at the best price for each deployment – and, in future, to shift operator when this is no longer optimal.