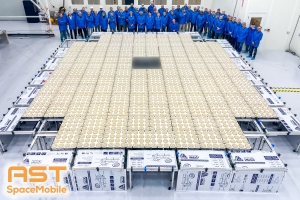 Midland, Texas. 13 June 2022 – AST SpaceMobile, Inc., the company building the first and only space-based cellular broadband network accessible directly by standard mobile phones, has confirmed it plans to launch its BlueWalker 3 test satellite from Cape Canaveral, FL during the week of August 15, 2022.

BlueWalker 3 carries a 693-square-foot phased array that is designed to test cellular broadband communications directly with standard mobile phones, from space, for the first time. AST SpaceMobile has invested approximately $85 million (€81.43 million) in the satellite’s development and the company’s engineers have successfully conducted more than 800 ground tests with BlueWalker 3. To date, the company has over 2,300 patent and patent-pending claims in support of its technology. The BlueWalker 3 mission is expected to complete the company’s initial research and development program and facilitate integration testing with mobile network operators around the world.

“The launch of BlueWalker 3 is the culmination of years of effort by our engineers to let us test connecting the phone in your pocket, with no modifications to the phone, directly with one of our satellites in space,” says Abel Avellan, chairman and CEO of AST SpaceMobile. “This revolutionary technology supports our mission to eliminate the connectivity gaps faced by more than 5 billion mobile subscribers today moving in and out of coverage, and bring cellular broadband to approximately half of the world’s population who remain unconnected. We want to close the gap between the digital ‘haves’ and ‘have nots’.”

The Federal Communications Commission (FCC) granted AST SpaceMobile an experimental license that allows the company to test BlueWalker 3 satellite-to-phone connectivity in the United States at sites in Texas and Hawaii. Once BlueWalker 3 is operational, the company plans to conduct testing on 5 different continents, in coordination with leading mobile network operators like Vodafone, Rakuten Mobile, Orange and others.

AST SpaceMobile’s investors and strategic partners in support of the company and its mission are leaders in cellular technology and infrastructure, digital services and the internet, including Vodafone, Rakuten Mobile and American Tower.

AST SpaceMobile is building the global cellular broadband network in space to operate directly with standard, unmodified mobile devices based on our extensive IP and patent portfolio. Our engineers and space scientists are on a mission to eliminate the connectivity gaps faced by today’s five billion mobile subscribers and finally bring broadband to the billions who remain unconnected. For more information, follow AST SpaceMobile on YouTube, Twitter, LinkedIn and Facebook. Watch this video for an overview of the SpaceMobile mission.

This communication contains “forward-looking statements” that are not historical facts, and involve risks and uncertainties that could cause actual results of AST SpaceMobile to differ materially from those expected and projected. These forward-looking statements can be identified by the use of forward-looking terminology, including the words “believes,” “estimates,” “anticipates,” “expects,” “intends,” “plans,” “may,” “will,” “would,” “potential,” “projects,” “predicts,” “continue,” or “should,” or, in each case, their negative or other variations or comparable terminology.

These forward-looking statements involve significant risks and uncertainties that could cause the actual results to differ materially from the expected results. Most of these factors are outside AST SpaceMobile’s control and are difficult to predict. Factors that may cause such differences include, but are not limited to: (i) expectations regarding AST SpaceMobile’s strategies and future financial performance, including AST’s future business plans or objectives, expected functionality of the SpaceMobile Service, anticipated timing and level of deployment of satellites, anticipated demand and acceptance of mobile satellite services, prospective performance and commercial opportunities and competitors, the timing of obtaining regulatory approvals, ability to finance its research and development activities, commercial partnership acquisition and retention, products and services, pricing, marketing plans, operating expenses, market trends, revenues, liquidity, cash flows and uses of

cash, capital expenditures, and AST’s ability to invest in growth initiatives; (ii) the negotiation of definitive agreements with mobile network operators relating to the SpaceMobile service that would supersede preliminary agreements and memoranda of understanding; (iii) the ability of AST SpaceMobile to grow and manage growth profitably and retain its key employees and AST SpaceMobile’s responses to actions of its competitors and its ability to effectively compete; (iv) changes in applicable laws or regulations; (v) the possibility that AST SpaceMobile may be adversely affected by other economic, business, and/or competitive factors; (vi) the outcome of any legal proceedings that may be instituted against AST SpaceMobile; and (vii) other risks and uncertainties indicated in the Company’s filings with the SEC, including those in the Risk Factors section of AST SpaceMobile’s Form 10-K filed with the SEC on March 31, 2022.

The actual launch date for the BW3 test satellite remains subject to change and is contingent on a number of factors, many of which are outside of our control. These factors include, but are not limited to, final testing, final integration, ground transport, timely readiness of the launch vehicle and other unknowns such as weather conditions or technical problems. The BW3 test launch may not be successful or even if successful, may indicate adjustments that are needed or modifications that must be made, any of which could result in additional costs, which could be material, and delays in our timeline. If there are material additional costs, we may need to raise additional capital beyond what is currently contemplated.

AST SpaceMobile cautions that the foregoing list of factors is not exclusive. AST SpaceMobile cautions readers not to place undue reliance upon any forward-looking statements, which speak only as of the date made. For information identifying important factors that could cause actual results to differ materially from those anticipated in the forward-looking statements, please refer to the Risk Factors incorporated by reference into AST SpaceMobile’s Form 10-K Registration Statement filed with the SEC on March 31, 2022.

AST SpaceMobile’s securities filings can be accessed on the EDGAR section of the SEC’s website here [sec.gov]. Except as expressly required by applicable securities law, AST SpaceMobile disclaims any intention or obligation to update or revise any forward-looking statements whether as a result of new information, future events or otherwise.