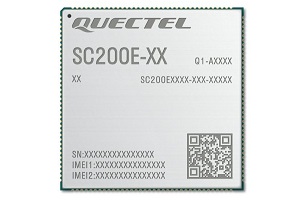 “We continue to expand our best-in-class portfolio for IoT solutions, with our smart module product line ranging from entry level, to high-end and premium products to satisfy the requirements of various AIoT markets,” says Norbert Muhrer, president and CSO of Quectel. “The launch of the SC200E series provides our customers with another great choice when developing advanced IoT applications for industries as varied as financial, retail, industrial, energy, health care, logistics and automotive to enable innovations and help build a smarter world.”

Based upon the Qualcomm QCM2290 platform which uses an 11nm process, Quectel’s SC200E series adopts a 64-bit quadcore Arm Cortex-A53 processor at up to 2.0GHz frequency, which enables the module to provide both greater power efficiency and reliable performance. Equipped with a powerful Adreno 702 GPU, the module also supports a dual image signal processor (ISP). This ISP enables up to 25 MP or 13 MP+13 MP dual cameras to work at the same time and 1080p@30fps video codec capability. Given these advantages, the SC200E is an excellent option for IoT verticals that require advanced multimedia features such as smart POS terminals, industrial PDAs as well as systems in micro-mobility applications.

Extended life cycle for IoT devices through to 2028

Quectel’s SC200E smart module has the Android 12 operating system (OS) built-in and supports future iterative upgrades to Android 13 or 14, which enables IoT devices to stay up-to-date with the latest features and improvements in the OS. Additionally, the SC200E series fully meets Google’s GMS license requirements. The extended life cycle means the SC200E series can meet the high reliability and sustainable upgrades requirements of industrial IoT devices through to 2028.

The SC200E series is pin-to-pin compatible with Quectel’s previous-generation smart modules including the SC20/SC200R modules, so industry customers can efficiently upgrade their existing smart terminals and use SC200E to achieve better performance. The SC200E integrates a variety of interfaces such as LCM, camera, touch screen, microphone, USB, and UART, which greatly expands its application scenarios including in retail, industrial, home and other fields, and helps customers to accelerate the time-to-market of their devices.

In response to the different needs of various regions around the world, the Quectel SC200E series provides multiple variants, including SC200E-EM for EMEA/ Korea/ South Asia/ Latin America/ Australia/ New Zealand/ South Africa, SC200E-CE for China, SC200E-NA for North America, and SC200E-WF for global regions (Wi-Fi & Bluetooth only), all of which have achieved mass production, while the SC200E-JP variant for Japan is scheduled to be sampling in Q3 of 2022.

As a supplier of IoT solutions, Quectel not only provides IoT modules, but also offers one-stop services for terminal development, including system evaluation, product design, prototype development, antenna design and testing services as well as after-sales services. The all-round technical support and services help customers to put their innovative ideas into practice in a faster, better and easier way.