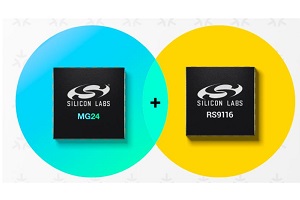 Austin, Texas, 13 September 2022 – Silicon Labs, the specialist in secure, intelligent wireless technology for a more connected world, has announced a slate of new products that further extend its multiprotocol-supporting, interoperability-driven, and robustly-secure portfolio with new products to advance the innovations and trends shaping the Internet of Things including Matter, Amazon Sidewalk, Wi-SUN, and Wi-Fi 6.

In the opening keynote of Silicon Labs’ annual Works With Developer Conference, Silicon Labs CEO Matt Johnson detailed how the era of the Internet of Things is here, and through its breadth of technologies, depth of expertise, and focus on the IoT wireless market, Silicon Labs has ascended to the leadership position in pure-play IoT.

“By 2025, it’s estimated that there will be 27 billion connected IoT devices, roughly 3 or 4 devices per person on the planet,” says Silicon Labs CEO Matt Johnson. “By focusing our Series 2 product offerings and roadmap on connectivity, interoperability, power efficiency, and security, Silicon Labs is positioned to be in each and every one of those devices.”

The Series 2 SoC family was developed under the premise that as the IoT matured, instead of looking for point solutions, the market would be looking for IoT platforms that combine hardware, software, security, tools, and support. The prediction has proven true, and Silicon Labs has nearly doubled its IoT revenue since the first member of the Series 2 family debuted in 2019. Today, Silicon Labs builds on the success of Series 2 with the expansion of the family to include four new products:

One of the biggest drivers for the new era of IoT will be the Matter standard, which will provide a unifying application layer to bring together multiple smart home ecosystems. To accelerate the adoption of Matter and to fulfill that vision, today Silicon Labs is announcing a portfolio of hardware and software Matter solutions that provide complete, end-to-end Matter development kits for all ecosystems and wireless protocols.

Announced and made generally available earlier this year, the central component of the platform is the Silicon Labs 2.4 GHz wireless MG24 SoC for Bluetooth and multiple-protocol operations and supports Matter over Thread as a single-chip solution. The MG24 has an effective range of up to 200 meters indoors for OpenThread while enabling Bluetooth commissioning of new devices on the same chip. When the MG24 is combined with the ultra-low power Silicon Labs RS9116 Wi-Fi product, it enables development of Matter over Wi-Fi 4 with an easy transition to Silicon Labs’ Wi-Fi 6 single-chip Matter SoC in 2023.

The Silicon Labs Unify SDK, the only multi-protocol software development platform for Matter Border Routers, provides the tools to bridge Matter to other IoT platforms, including Zigbee and Z-Wave, and Silicon Labs Simplicity Studio and GSDK provide developers a single development environment for enabling Matter on wireless devices and seamlessly connecting them to their desired ecosystem.

So no matter the protocol Bluetooth, Thread, Wi-Fi, Zigbee, or Z-Wave Silicon Labs offers hardware, software, and development tool solution to enable developers to bridge their products to Matter and all the major smart device ecosystems. The MG24 Matter-ready SoC, RS9116 Wi-Fi SoC, the multiprotocol Unify SDK, Simplicity Studio, and the Gecko SDK are available today for developers and designers to begin designing Matter-ready products using the wireless protocol of their choice.

As the leader in wireless connectivity, Silicon Labs is the IoT semiconductor companies to offer a complete platform, including both hardware and software, and serves as a one-stop shop for IoT development. Today, Silicon Labs is announcing they’re extending that leadership with Amazon Sidewalk, the community network powered by millions of everyday IoT devices found in communities and organisations, by offering an end-to-end development platform: The Silicon Labs Pro Kit for Amazon Sidewalk.

“We’re excited to work with Silicon Labs to enable developers to build devices and experiences powered by the secure, ubiquitous, and always-on community network that we are building in Amazon Sidewalk,” says Tanuj Mohan, general manager and chief technology officer at Amazon Sidewalk. “The new Amazon Sidewalk Pro Kit from Silicon Labs streamlines the development process, so developers can deliver innovative products with Amazon Sidewalk’s enhanced connectivity at scale.”

Silicon Labs is excited to be working with Oxit and New Cosmos USA Inc. on the gas alarm running on the Silicon Labs Amazon Sidewalk platform: a connected DeNova Detect natural gas alarm that can provide real-time gas leak alerts. With Oxit, an IoT design services company based in North Carolina, New Cosmos USA Inc. will be adding this new alarm to their large portfolio of devices that help save lives. With Amazon Sidewalk, the new alarm will benefit from reliable, long-range, low-bandwidth coverage, extended battery life, and no network connectivity costs. Both Oxit’s Amazon Sidewalk IoT integration platform and New Cosmos USA Inc.’s new gas alarm products will be showcased during this year’s Works With Developer Conference.

While anyone can develop an Amazon Sidewalk device, Amazon Sidewalk connectivity is currently only available to end consumers and endpoint devices in the U.S. The Silicon Labs Pro Kit for Amazon Sidewalk is sampling today, with general availability planned for 2H 2023.

To see how easy it is for developers to get started with Amazon Sidewalk, read our blog: New Solution from Silicon Labs Streamlines the Amazon Sidewalk Developer Journey.

To help address the growing need for intelligent, connected devices in cities and other municipal environments, Silicon Labs is announcing the new FG25 SoC and its complementary RF power amplifier, the EFF01.

Built to be the flagship SoC for low-power wide-area networks (LPWAN) like Wi-SUN and other proprietary sub-GHz protocols, the FG25 SoC combines a powerful ARM Cortex-M33 processor with the most internal memory of any SoC in Silicon Labs’ portfolio. This large pool of internal memory, combined with Silicon Labs’ scalable Wi-SUN Field Area Network (FAN) Border Router 1.1, enables FG25 deployments to scale to hundreds of thousands of nodes. Ideal for Smart Cities, this ability to scale will allow city planners and municipal engineers to connect streetlights, cameras, weather stations, smart metering, utility transmission systems, and more together to enable data-sharing and optimisation between city services to improve their efficiency, save costs, and offer more ways for citizens to interact with and get more value from municipal services.

Also launching with the FG25 SoC is the EFF01 RF Front End Module. Designed to amplify the power and transmission range of the FG25 SoC, the EFF01 FEM doubles the effective range of the FG25, allowing it to operate with minimal data loss at a range of up to 3 kilometersi in dense urban environments. The FG25 and EFF01 are currently sampling with customers and are anticipated to become generally available in Q4 2022 and Q2 2023, respectively.

Deloitte’s “2022 Connectivity and Mobile Trends Survey” found that the average US household has up to 22 connected devices. That number is expected to grow. But with this greater density comes additional challenges that Wi-Fi 6 is designed to address with features that provide the capacity, efficiency, coverage, and performance required by users in demanding Wi-Fi environments.

To meet those challenges, Silicon Labs is announcing the new secure ultra-low power SiWx917 Wi-Fi 6 and Bluetooth LE combination SoC, the first Wi-Fi 6 solution in Silicon Labs’ portfolio. The SiWx917 is a single-chip solution that is Matter-ready, includes an integrated applications processor, and offers energy efficiency, making it ideal for battery-powered or energy-efficient IoT devices with always-on cloud connectivity.

The SiWx917 is currently sampling, with general availability anticipated in early Q3 2023.

See why Wi-Fi is so critical to Matter by reading our blog, Wi-Fi 6 Addressing the Greater Density of Wi-Fi IoT Devices .

These announcements and more are taking place during Silicon Labs’ annual Works With Developer Conference, the premier developer conference for building the skills needed to create impactful connected devices while bringing together the technology brands, device manufacturers, alliances, designers, wireless standards, and ecosystem providers that are leading the way towards a more unified wireless experience.

Registration for Works With is free, and sessions are available across all time zones. Visit the Works With agenda for more information on the over 75 technical sessions, ten hands-on workshops, and 150+ subject matter experts, including executives from ABI Research, Amazon, Edge Impulse, Google, Kudelski IoT, the mioty alliance, MYSPHERA, OMDIA, Oxit, Schneider Electric, SensiML, Tigo Energy, and the Wi-SUN Alliance. Sessions will also be made available on-demand after the conclusion of Works With.