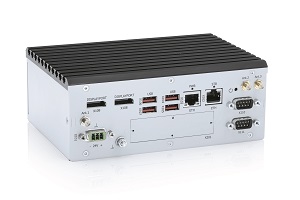 Ismaning, Germany – Kontron, a global provider of IoT/Embedded computing technology (ECT), will present a new industrial computer in Box PC format at SPS 2022. Based on 6th Gen Intel Atom or Celeron processors, the KBox A-151-EKL offers sufficient computing and graphics performance for IoT edge applications. As a special feature, the system has an expansion slot on the front (I/O Door), which can be used to expand the KBox A-151-EKL with additional functionalities such as fieldbuses, interfaces for graphics, serial or digital I/Os and Ethernet interfaces. Optionally, 4G/5G or Wi-Fi 6 connectivity can also be added to the system.

The KBox A-151-EKL is specifically designed for performance-hungry low-power IoT gateway applications in industrial environments. Based on the 6th Gen Intel Atom x6425RE / x6212RE or the Intel Celeron processor J6413 with up to four processing cores as well as a maximum memory expansion of 32 GB, the new Box PC supports OEM manufacturers and system integrators in realising the full potential of their IoT infrastructures.

A wide range of functionalities can be added to the system by means of the three M.2 expansion slots, which can also be used for integrating fieldbuses and wireless technology such as 4G/5G or even Wi-Fi 6 connectivity, in addition to integrating NVMe SSDs. The majority of system expansions are made accessible via the new expansion slot (I/O Door) located on the front of the system.

The fanless, robust system design guarantees an extended service life and high system availability even in harsh industrial environments. The KBox A-151-EKL can be operated in the range from 0 °C to +60 °C or optionally in the extended temperature range between -40 °C and +60 °C. The Box PC can be easily integrated into a wide range of industrial environments by means of DIN rail mounting or wall mounting.