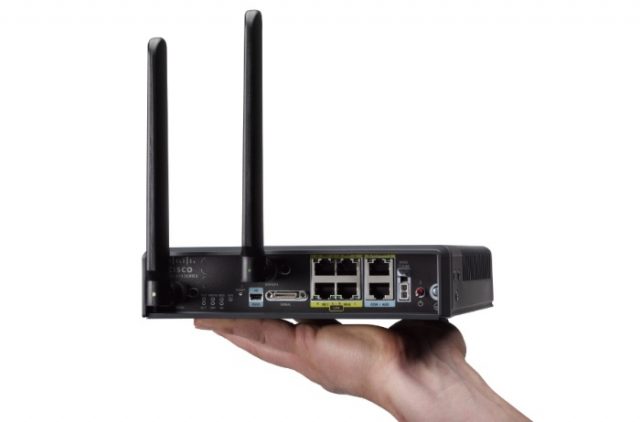 Small, rugged and perfectly formed? As part of their vision to deliver on ‘The Internet of Things’, Cisco has released the 819 ISR in a bid to aggressively target the transport, smart meters and embedded apps market.

The Cisco 819 ISR Machine-to-Machine Gateway serves as a single, integrated platform that extends corporate 3G/4G wireless WAN network services to small devices in challenging environments far beyond the confines of headquarters. Cisco estimates that technologies such as the Cisco 819 ISR will help connect more than 50 billion devices to the Internet by 2020.

Being marketed as “lighter than the lightest Apple MacBook Air”, “smaller in length and width than the Apple iPad2”, the hardened version can withstand temperature ranges of minus 25 degrees to 60 degrees Celsius — both of which may be encountered in outdoor ATM deployments. The hardened version also provides the flexibility for deployment in many different stationary and mobile environments where they may be subjected to shock from falls, vibration such as that encountered on commercial vehicles, temperature variations and fluctuations, dust, splash water, or low power availability.

Tellingly, the 819 ISR has been priced to target emerging markets. Many emerging countries are adopting 3G as their main connectivity. Priced at approximately €1600 for the ruggedised version and with its 3G support, the Cisco 819 ISR should appeal to organisations in these countries looking for integrated micro-branch support.

With a working example of the technology in action, Ketil Kivedahl, chief executive officer at TDC Norway, added, “The Cisco 819 ISR offers TDC a unique opportunity to deliver an affordable and competitive service to the market. In the case of the Norwegian Public Roads Administration, the hardened Cisco 819 router enables TDC to offer a new real-time traffic monitoring service by connecting 700 traffic enforcement cameras into their WAN network. TDC also sees a huge potential in IP enablement, especially in the transport and industrial sector.”

Praveen Akkiraju, senior vice president and general manager of the Service Routing Technology Group at Cisco said, “Disruptive technologies and new business models are driving our customers to deploy intelligent networks closer to end users across diverse environments. We are excited to bring the ISR to interesting new applications such as ATM machines and ambulances.”