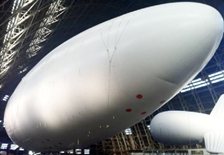 Despite already spending more than US$140 million (EUR106 million), the US Air Force is said to be pulling out of a project to use a large spy airship in Afghanistan. The scheduled first flight of the 112m (370 foot) long Blue Devil Block 2 (pictured) dirigible is just weeks away, but technical difficulties and massive project cost increases are now likely to ground the programme.

According to a report on Wired.com, the Air Force appears to be mothballing its blimp spy ship before it even gets off the ground.

Only a short while ago Blue Devil was being touted as the future of aerial surveillance. Instead of relying on a drone’s single sensor, the US military would, it was said, deploy Blue Devil’s cameras and eavesdropping systems to watch whole villages for days at a time. Using the space aboard the airship, a large array of of processors could assess the generated data, to ease the burden on intelligence analysts who are already overloaded with work from drones’ video feeds.

Now, following a series of technical complications and new, inflated cost estimates, the Blue Devil programme is being axed, in much the same way as the US Navy recently canned its MZ-3A airship, and the Army grounded its own much-delayed Long Endurance Multi-Intelligence Vehicle.

Steven Walker, the US Air Force’s deputy assistant secretary for science and technology, told a Congressional panel last week, “Warfighter feedback on the situational awareness provided by Blue Devil Block 1 has been overwhelmingly positive. Since December 2010, Blue Devil ISR [intelligence, surveillance, and reconnaissance] has been instrumental in identifying a number of high value individuals and improvised explosive device emplacements.”

But, as Wired’s Noah Schachtman reported, schedules slipped when the airship’s tail fins came in overweight and subcontractor Rockwell Collins found the avionics of an airship were more complex than expected. The Argus network of spy cameras, which could oversee 64 square kilometers at once, couldn’t be integrated with the rest of the sensors; the blimp-builders had to settle for an Angel Fire camera pack, which could only look at a mere four square kilometers at a time. Finally, a large laser intended to beam large quantities of surveillance data to the ground couldn’t be custom-built in time.

Wired says that the real body-blow for the programme came when the Air Force’s special intelligence program office, ‘Big Safari’, published the estimated costs of flying the blimp in Afghanistan. Instead of costing US$45 million, far less than an equivalent number of spy drones, the estimated operating cost looked likely to reach $188 million.

The US Air Force has yet to formally decide the future of the massive blimp, but it is perhaps significant that the service’s budget for next year reportedly contains no funding to develop or operate the blimp.