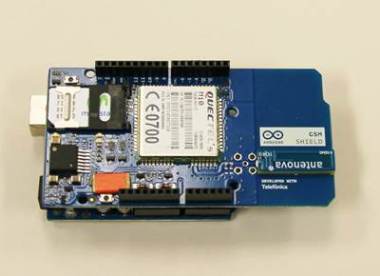 Berlin, Germany. August 24, 2012.- Arduino and global network operator Telefónica are presenting a new version of the Arduino GSM/GPRS Shield project at the Campus Party in Berlin. The project has added a GPRS/GSM connection to a free hardware motherboard, creating a low-cost device connected through Telefónica’s M2M technology and offering a range of possibilities for simple and cost-effective advances in the internet of things (IoT).

Arduino is an open source electronics prototyping platform based on flexible, easy-to-use hardware and software. It is intended for artists, designers, hobbyists, and anyone interested in creating interactive objects or environments. Arduino can sense the environment by receiving input from a variety of sensors, and can affect its surroundings by controlling lights, motors, and other actuators.

This Shield, which marks a further development in the initiative presented at Valencia’s Campus Party 2011, brings in some notable new features. The hardware and associated software have improved both in terms of their usability and their capacities. The libraries are smaller and additionally allow ‘asynchronous’ use, meaning that Arduino is free to perform other tasks while the shield is communicating.

In addition, Arduino shield users can sign up to a communication service provided by Telefónica through which they can manage their Arduino remotely from the BlueVia website (BlueVia is Telefónica’s global API program*). The service includes its own Telefónica M2M (machine-to-machine) SIM cards, which will allow access to it from European Union countries, the USA and almost the whole of South America.

All these new advances can greatly benefit developers as they allow them to go on developing M2M communication applications in a straightforward and cost-effective manner.

Arduino is claimed by the company to be the current hardware of choice for producing prototypes of future systems. It is often used in making the initial versions of new products and prototypes as a prelude to making the required final hardware in miniature.