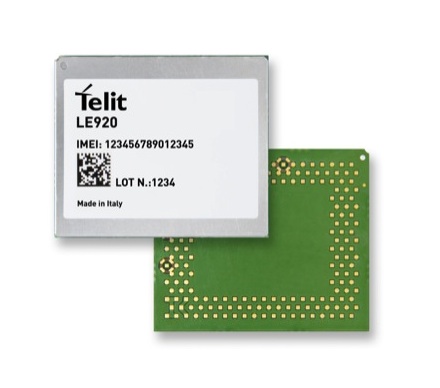 Telit Wireless Solutions, a vendor of M2M modules and value-added services, has announced the introduction of the LE920 LTE module for European and North American OEM Automotive and aftermarket segments. The new 920 form factor measures 34x40x2.8mm and delivers 100Mbps-down and 50Mbps-up data rates on LTE networks. It is fully fallback compatible with DC-HSPA+ and quad-band GSM/GPRS and EDGE performance ensure it connects even in remote areas devoid of 3G or 4G coverage.

Equipped with a high performance multi-constellation GPS plus GLONASS receiver, the LE920 module has been designed for full-featured integrated navigation systems and location based services delivered through a car’s infotainment system.

The LE920 was designed to meet the most current specifications for the European eCall and Russian ERA-Glonass programs. Mandated by the European Commission, all new cars must have an eCall automatic emergency in-vehicle call system installed by 2015. The system is designed to enhance quality and speed of rescue operations in automotive accident response efforts.

In case of a crash, the eCall system transfers the necessary accident data to the nearest emergency service response centre. ERA-Glonass was designed to be compatible with the European eCall standard. The objective of the program is to combine mobile communications and satellite positioning for faster incident assistance. Its infrastructure is planned to be installed in 2013 with systems mandated in all vehicles in 2014.

The LE920 includes Rx diversity which allows the end-device to be equipped with two distinct cellular antennas improving the quality and reliability of the wireless connectivity in urban areas, underground, and other similar scenarios, making the product ideal for applications such as an in-vehicle hot-spot. Fully voice capable, the module provides full-duplex PCM as well as analog input and output for applications such as a hands-free in-car cellular functionality, fleet management and other vehicle voice gateway applications.

For easy integration, the product includes a USB 2.0 high-speed port and device drivers for most Windows and Linux platforms, and will be available in local variants as required for all major LTE carriers and partner networks in North America and Europe.

As the LE920 was conceived specifically for the automotive market, it boasts an extended temperature range, operating from -40°C to +85°C, designed and manufactured under the strict automotive quality standards specified in the ISO/TS16949. Additionally, materials, facilities, and processes applied on the LE920 also comply with Production Part Approval Process or PPAP, a full traceability framework standard adopted by the automotive industry which among other things allows defective parts to be traced back in its full genealogy up the supply chain.